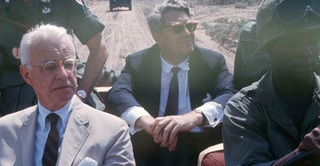 Ambassador Ellsworth Bunker, United States Ambassador to the Republic of Vietnam from 5 April 1967 to 11 May 1973, wrote lengthy monthly reports to Presidents Lyndon Johnson and Richard Nixon. Bunker wrote a final report to President Johnson on the President’s last days in office, on 16 January 1969. It ran to 56 pages. In it, Bunker reviewed the situation in South Vietnam over the preceding years of the Johnson administration.

Bunker’s views about the Tet offensive of 1968 and South Vietnamese political developments are particularly interesting. He noted: “As I have mentioned, the Tet offensive was one of the two important watersheds of the past year. At the outset at least, it was viewed as an unmitigated disaster by most western observers. The Vietnamese on the other hand, with much justice, felt they had sustained the worst the enemy had to offer; they were elated because they had not only survived the onslaught, but had hurt the enemy badly in the process. For the most part, they were only vaguely aware of the devastating effect of the Tet attacks on American opinion. Even today [in January 1969], they find that effect hard to comprehend.”

“The enemy onslaught found a new constitutional government barely three months in office and still in the process of shaking down and completing the formation of the basic institutions. The Loc Cabinet [the Cabinet of Prime Minister Nguyen Van Loc, 31 October 1967 to 17 May 1968] was an unhappy compromise between [President Nguyen Van] Thieu and [Vice President Nguyen Cao] Ky with little to recommend it beyond its acceptability to both. The tension between the military and civilian political elements, exaggerated during the presidential elections, was still high. The new legislature had done little but argue its internal rules. It is not surprising that the enemy hoped for political impotence if not outright political collapse when he launched his attacks at the cities of SVN.”

“In fact, the political strength, vitality, and determination of the South Vietnamese nationalists was never more clearly demonstrated than in the days and weeks that followed the Tet attacks. The enemy anticipated mass support from the urban proletariat and mass defections from the ARVN. Nothing of the sort happened. The army fought well and rapidly expelled the enemy from the nation’s cities. The people demanded arms, a sweeping civil defense program, and drastic general mobilization.”

“The fledgling Assembly did not dissolve or stand impotent. Although its members were scattered throughout the country for the holiday, it immediately convened and took up its full constitutional responsibilities in the midst of the crisis. As an elected and functioning constitutional body, the legislature proved invaluable in creating an atmosphere of confidence and stability. It vindicated our earlier judgment that a constitutional government, even if more complicated to operate than a dictatorship, would be better able to harness the vital forces of the nation.”

“Political organizations, old and new, took their stand against the communists and sought to assist the government in the recovery efforts. Two new political groups, devoted to national unity, the National Salvation Front and the Free Democratic Force, emerged as a direct response to the communist assault.”

“The installation of the Huong government [the government of Prime Minister Tran Van Huong, 28 May 1968 to 1 September 1969] in May was an event of considerable political significance. It was the first change of government under the new Constitution, a change accomplished without a coup and in direct response to legitimate political pressure for more effective and more popular leaders. While this kind of change is customary in democratic countries, it was a dramatic departure in Vietnamese political experience.”

Bunker was impressed with Huong’s contribution. Writing in January 1969 he said that since coming to the Prime Ministership in May 1968 Huong had introduced significant changes: He strengthened popular support for the Government of Viet Nam; He gave new impetus to Thieu’s efforts to reduce corruption; He carried out successfully the sweeping general mobilization and self-defence program and working closely with Thieu, he did much to prepare the South Vietnamese people for a negotiated settlement and the coming political struggle with the communists.

Bunker identified what he saw as the major weaknesses still facing South Vietnam. The principal one of these was the continuing failure to organize effective, broad-based national political parties.

Some work had been done towards solving this problem. With Thieu’s encouragement the National Salvation Front and the Free Democratic Force were merged to create (together with the leading South Vietnamese labor union) the Lien Minh, an umbrella political grouping designed to unite nationalists and prepare them for the coming political struggle with the communists. However the Lien Minh had a number of weaknesses including divisions in its top leadership. Although it had made some progress it remained well short of creating the degree of nationalist unity that would be required in a political confrontation with the communists.