The 5th Việt Cộng Division – with an estimated strength 4,500[1], comprised two main force infantry regiments: the 274th (aka 4th) Regiment and the 275th (aka 5th) Regiment. During the Battle of Long Tân against Australian forces on 18 August 1966, the 275th Regiment suffered heavy casualties – over 200 killed.[2] The 274th Regiment – the more effective of the two regiments, was not at the Battle of Long Tân, but was preparing for attacks on strategic hamlets in south-western Long Khánh Province.[3]

Four months after the Battle of Long Tân, the 274th Regiment struck a significant blow against Army of the Republic of Vietnam (ARVN) elements on 9 December 1966 when they attacked ARVN recruits at the firing range camp of the Vạn Kiếp National Training Centre on the north-western outskirts of the Phước Tuy Province capital – Bà Rịa Town (Phước Lễ), vicinity YS363621 – see the following map.[4] 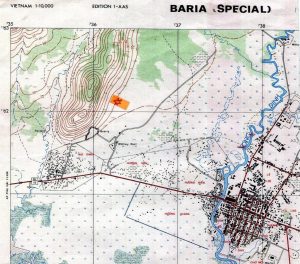 Site of the rifle range north-east of Baria

According to the 5th VC Division History (2005), this attack at the Vạn Kiếp firing range camp was conducted by the 2nd Battalion of the 274th Regiment and the local force “Châu Đức Company” at 1700hrs on 18 November [sic] 1966 – resulting in “187 ARVN captured and 71 weapons of various types seized.”[5] The 274th (4th) Regiment History (2015)[6] relates the Regiment’s 2nd Battalion capturing 180 ARVN recruits on 18 November [sic] 1966 at the Vạn Kiếp National Training Centre’s firing range at the base of the Núi Dinh Mountain about two kilometres north-west of Bà Rịa Town (vic YS363621).

From 2030hrs on 9 December 1966 – at ARVN Phước Tuy Sector Headquarters (Bà Rịa) request, 1 ATF fired artillery support (total: 35 fire missions – including illumination) for the two ‘cut-off’ ARVN companies at the firing range. Sector Headquarters requested a supporting 1 ATF ‘heliborne operation to block the VC withdrawal’ – however ‘the request was not concurred in by advisor.’ HQ 1 ATF replied: ‘Regret all available troops on Operation CANARY’ (ie 5RAR operation on Route 15).[7] On 10 December, 1 ATF reported casualties in the ‘two ARVN recruit companies’ as: ‘11 KIA, 26 WIA, 184 MIA’ and ‘enemy losses were 2 VC KIA BC’. ‘The VC engaged from the east with 57mm RRs,

12.7mm HMGs, and SAs.’ ‘VC battalion was not positively identified but was thought to have been possibly 265 Bn/274 Regiment or D445 Provincial Battalion’.[8] The 1 ATF Commander’s Diary (C 2118) for December 1966 summarised: ‘The VC carried out a most success full raid on 9th December when 265 Bn of 274 Regt attacked ARVN recruits on a rifle range at Baria. ARVN losses were 174 missing believed captured and considerable quantities of weapons and equipment lost.’[9]

The firing range was about nine kilometres south-west of the 1 ATF base at Núi Đất. Subsequently, a 1 ATF Intelligence Review dated 11 January 1967 noted that the route of the Việt Cộng force to the firing range was from north and west of Núi Nghệ (YS3972), followed by pre-attack preparations at Suối Cát (YS3767) on 7 and 8 December 1966.

274th Regiment reportedly ‘organised an education program for the ((remaining)) prisoners and chose 80 of the soldiers who had volunteered to join the revolutionary forces. 40 were incorporated into the Bà Rịa local forces and 40 into the units of the 4th Regiment ((ie the 274th Regiment)).’[11]

In February 1967, the VC attack and capture of the ARVN personnel was summarised – with some additional detail, in a 6RAR report:

Two ARVN Coys on night infiltration course near a camp (ARVN) were attacked and the camp was overrun. ARVN had their weapons stacked and only had blank ammunition. A 57mm RCL opened the attack by the VC who were only 6ft away from the perimeter wire. The shot hit the Command Post – killing the commander and knocking out the radio set. The main attack was from the east, but the enemy had approached from – and withdrawn to, the north. A 12.7mm weapon was also used. Captured by the VC were 79 rifles. Friendly forces’ losses were 11 killed in action, 27 wounded in action, 184 missing in action, three children killed in action, and two civilians wounded in action.[12]

The Security of Route 15

The security of Route 15 – from Vũng Tàu, through Bà Rịa, and north-west into Biên Hòa Province, was of particular security concern to the US and RVNAF Command. Arriving US formations disembarked at Vũng Tàu – and then transited Route 15 to bases at Biên Hòa, Long Bình, and Bearcat.[15] In mid-1966, COMUSMACV General W. Westmoreland and Lieutenant General J. O. Seaman (Commanding General II FFV) had declared Route 15 as a ‘Priority 1 A’ security task. In the period 7-12 December 1966, 1 ATF’s 5RAR was securing Route 15 – Operation Canary.[16]

On the 15th October 1966 at YS287719, 1 ATF’s 5RAR recovered the 53-page notebook of Nguyễn Nam Hưng – the ‘Acting’ Chief of Staff of the 274th Regiment, that covered the period 15 August to 7 October 1966.[17] The last entry outlined future tasks including attacking the ARVN Phước Biên post (Phú Mỹ – Route 15) and to ‘raid the firing range (Phước Tuy City)’.[18] In his 2006 Memoir, Nguyễn Nam Hưng related: ‘The Vạn Kiếp firing range was south of Phước Tân – at the base of the mountain, with the Dinh River at its rear. … Exploiting the Dinh River, we waded through the water during the day – we could not be seen from Núi Đất ((ie the 1 ATF base)). D-day was 18 November [sic], and Zero-hour was 2030hrs. … After 30 minutes of fighting, the 2nd Battalion had wiped out the two companies[19] at the range and a protective company[20]. Both our 12.8 HMGs and 82mm mortars were used in the action. We captured 187 enemy and seized 71 weapons of various types. … When the Battalion had withdrawn back to the Hắc Dịch with the 187 prisoners, it was 0300hrs.’

From mid-September 1966, 1 ATF’s Signals Intelligence (SIGINT) element – 547 Signal Detachment, was able to ‘fix’ the location of the 274th VC Main Force Regiment and its battalions – and ‘read’ the morse communications of the 274th Regiment to its major subordinate elements – including its two infantry battalions.[22] Aware of the US and 1 ATF SIGINT intercept capabilities, in early December 1966 the 274th Regiment probably employed ‘radio silence’ for its operation against the ARVN elements at the Vạn Kiếp firing range.

The Australian Official History notes that: ‘Sigint made a vital contribution to information-gathering throughout the Vietnam War.’[23] However – while an important input to operational planning, Direction Finding (DF) fixes – often intermittent, were no intelligence ‘panacea’ for US forces nor HQ 1 ATF. Some VC transmitters could not be located by SIGINT DF for some time – occasionally not for several weeks. The 1st Battalion of the 274th Regiment was not located by SIGINT in the period 18 February – 3 July 1969; and its 2nd Battalion was unlocated for three months (June-August 1971).[24] Following 1 ATF’s Operation Overlord into the Phước Tuy/Long Khánh Province border area (5 – 14 June 1971), a 1 ATF INTSUM noted that – apart from the 3rd Battalion of the 33rd NVA Regiment, the headquarters of the 33rd NVA Regiment and its 1st and 2nd Battalions had not been ‘fixed’ for quite some time.[25]

Further – even if a location of an NVA/VC element was fixed, as ‘light infantry’ NVA/VC troops were highly mobile and could move rapidly across-country – reportedly ‘20 to 25 kilometers in one night’.[26] Phước Tuy Province was only about 55 kilometres from east-to-west and about 35 kilometres from north-to-south (an area of 1,958 sq km – about 3% of the size of the Tasmania).

[3] Chamberlain, E.P., The Viet Cong D445 Battalion, 2016: Annex M, The 274th Regiment – Not at the Battle of Long Tân (nor planned to ambush any US reaction force). The 274th Regiment was based in the Hắc Dịch “Secret Zone” – astride the tri-border junction of Phước Tuy/Long Khánh/Biên Hòa Provinces  (YS2693 east to YS4093, south to YS4078 and west to YS2478 – a 250 sq km area of jungle and rubber plantations) and operated against Route 15 in Phước Tuy Province in 1965 and 1966. On 11 April 1966, during the US 1st Infantry Division’s Operation Abilene, the 1st Battalion/274th Regiment attacked the Division’s Charlie Company/2nd Battalion of the 16th Regiment at Tầm Bố/Cẩm Mỹ in north-eastern Phước Tuy (YS540862). Initially unsupported by other companies, the 134-strong Charlie Company suffered 48 KIA and 58 WIA.

[19] Captain Michael (Mike) Wells – AATTV, Operations Advisor at Phước Tuy Sector Headquarters 1966-67, noted that ‘additional to ARVN recruits’, there were also Vietnamese Marine Corps elements at the range location undergoing ‘retraining’ that day. ‘The Regional Forces company [sic – see the following footnote] camp near the range was also over-run’ – and the VC ‘not only slaughtered the soldiers, but also women and children living in the outpost. … it was more than embarrassing for the Province Chief ((Lieutenant Colonel Lê Đức Đạt)) and further up the chain.’ Email exchange: Chamberlain – Wells, 14 May 2021. Major W. A. (Alex) Piper – GSO2 Int HQ 1 ATF 1966-67, has remarked that Brigadier ‘Jackson was stunned … .’ Email exchange: Chamberlain – Piper, 13 and 14 May 2021.

[24] SIGINT Weekly Summary 15/69 and 547 Signal Troop Report 547-326, 4 July 1969. The 1st Battalion was probably proximate to the Regiment’s Headquarters, and communications were direct or by courier etc.

[26] According to a senior NVA officer who rallied in 1970 – Lieutenant Colonel Nguyễn Văn Nang: ‘during the Dry Season, VC units could move approx 20 to 25 kilometers in one night.  Normally, they travelled four kilometers per hour, and marched for five to five and one-half hours per night; during the Rainy Season, it took the units approx 33 percent more marching time to cover the same distance.’ VCATT Item No.11271006005.