We’ll soon be updating the website with the addition of data about 2 Squadron, Royal Australian Air Force, Canberra bomber (B-57) strikes.

During the war the United States military collected data on every air sortie conducted in the campaign. The data includes the date, time, launch airfield, target location, ordnance used, type of target, target effect, aircraft losses and a whole lot more. All of this data was stored digitally on early model computers and, after the war, found its way to the National Archives and Records Administration in College Park, Maryland, near Washington. 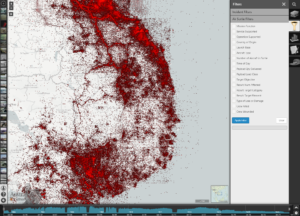 We’ve been hard at work processing this data from its raw form, to make it able to be analysed and represented visually. Figure 1 depicts air sorties flown over North and South Vietnam, Cambodia and Laos during the period of the Vietnam War. This is a preview of what we’ll be launching in the near future. Further to this, we’ve taken this data and extracted all the B-57 (Canberra bomber) sorties launched from Phan Rang, where 2 Squadron was based. Unfortunately, there was a US Air Force unit also flying B-57s from Phan Rang, and one of the few things the data doesn’t record is nationality, so we’ve found it impossible to separate RAAF missions from the USAF B-57 missions. Maybe there are RAAF aircrew out there who can help us identify which of the missions are RAAF missions and which are USAF.

We would welcome RAAF veterans who served with 2 Squadron to visit the website, register, and then upload their recollections about missions they participated in, and their photos recording their service. This will help to build a rich resource for future research into the campaign.

Our next update will show all B-57 (Canberra bomber) missions out of Phan Rang, about half of which were 2 Squadron RAAF missions, plus all missions by any other air force (US or South Vietnamese), and by any aircraft type, in support of operations in Phuoc Tuy Province. This will provide the best available picture of the scale of the air war by the RAAF and in the 1st Australian Task Force Area of Operations.

Please pass the word on the veterans’ network, letting your mates know about this new feature on the website.

As soon as we’ve finished with the 2 Squadron missions, we’ll switch our efforts onto the Naval Gunfire Support data. Once again, the US collected vast amounts of data on these naval operations and stored it on early-model digital systems.  After we’ve overcome some of the technical difficulties of converting the digital data to modern systems and amalgamating files, etc., we’ll be able to show all RAN Naval Gunfire Missions, plus all Free World Forces (mainly US and South Vietnamese) naval operations affecting the 1st Australian Task Force Area of Operations in Phuoc Tuy Province.

Don’t forget, after registering on the site, anyone can add a community note or upload photographs. We’re relying on your help to make this the best site on Australia’s role in the Vietnam War and to set the standard for future websites, so please, add your recollections and scan and upload your photos. You can also make a digital audio recording using your mobile phone and upload the recording if you would prefer.