The significant threat posed by swimmer sappers in Vietnam was accentuated on 1 November 1968 when USS Westchester County (LST-1167), a 115m tank landing ship, was attacked, resulting in the US Navy’s greatest single-incident combat loss of life during the entire Vietnam War.

The ship had resumed duty with the Mobile Riverine Forces on 22 September. At 0322 on 1 November while she lay anchored in the vicinity of My Tho in the Mekong Delta about 40 miles upstream from Vung Tau, two giant underwater explosions ripped through the ship. Swimmer sappers had attached two mines each containing some 250 Kg of explosives to the hull amidships on the starboard side. Compressed between the pontoons and the LST’s hull, the force of the explosions was driven upward, shredding steel plating, rupturing fuel tanks and blasting into the accommodation spaces. Final casualty figures showed 25 killed and 27 wounded.

After beaching at Đồng Tâm for temporary repairs, she returned to Yokosuka, via Subic Bay, on 26 November for repair and returned to the War in March 1969, 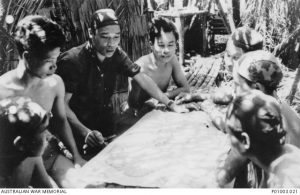 At a camp in the jungle swimmer sappers study a map laid out whilst planning an attack. The photograph was captured from the VC. (Jake Linton collection)

The team of swimmers that had affixed the explosives to the hull of Westchester County were ‘sappers’, members of the Bo Doi Dac Cong (soldiers in special forces), a highly organized, well-trained and well-equipped organization that carried out special operations.

Within the Sapper Group were three distinct types of sapper units. Urban sappers were devoted to intelligence gathering, terrorism, assassination, and special operations in large urban areas such as Saigon and Hue.  Field sappers conducted operations against U.S. and South Vietnamese troops, trained other Communist troops as sappers, and provided Communist leadership an elite force for lightning raids.  Naval swimmer sappers were responsible for attacking merchant and naval shipping, bridges, and bases near waterways.  Merchant ships delivering munitions and other materials to Vietnamese ports in support of the allied war effort were popular targets, as were ship and barges of the Mobile Riverine Force that berthed large numbers of US soldiers, and lesser numbers of Riverine Force personnel.

An attack on a waterborne vessel called for the placement of one or more explosive charges directly onto the hull of the target.  The first challenge confronting the swimmers was to arrive at the target covertly.  Depending on where the vessel was moored or anchored, the swimmers had to get their explosive charges to the target by swimming from shore or being dropped off by sampan.  Once close enough to the target, a two-man swimmer cell normally swam covertly beneath the water’s surface using snorkels, each dragging an individual charge or working together to carry a single large charge.  The two members normally tied a rope between themselves to facilitate the attack and prevent themselves from becoming separated.

The swimmers could then manoeuvre and place the charge or charges against the hull of the target.  The explosive(s) were attached, either magnetically or tied to the hull, and the fuses activated.  The latter could be either command detonated or time-delayed, but time-delayed tended to be the preferred method as it required no additional activity by the swimmers, whose goal was to escape undetected and survive the mission.

A Commander Naval Forces Vietnam study in 1969 calculated that there were 88 successful swimmer/sapper attacks against shipping in Vietnamese waters between January 1962 and June 1969 which killed more than 210 personnel and wounded 325. Against this only 20 enemy sappers were killed or captured for all attacks whether successful or not, emphasising the extremely advantageous payoff to the enemy of this type of attack.

USS Meeker County (LST980) was a unit of Landing Ship Squadron 3, operating from Da Nang. The ship, originally commissioned in March 1944 and decommissioned in 1955, was reactivated in 1965 in response to an urgent need for amphibious support in Vietnam. She was 1,600 tonnes, 100m length, 15 m beam and draught of 4 m.

On 27/28 June 1970, Meeker County was berthed starboard side to Delong Pier at Vung Tau. At approximately 0220 on 28 June, the starboard bow sentry noticed a white line tied to a pier fender under the bow. Two minutes later a swimmer surfaced near the fender; the sentry fired and the swimmer disappeared underwater. Shortly afterwards an unarmed sentry on the quarterdeck sighted a surface swimmer 15 metres on the port side swimming on his back away from the ship. He alerted others and located some grenades but by this time the swimmer was some 30 metres away and beyond reach of the grenades and was soon lost from sight. The ship went to general quarters and the line was raised to pier level, hauled tight and secured. 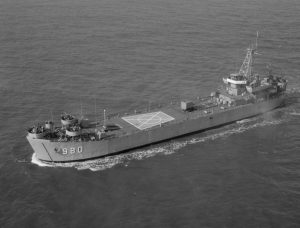 At 0250, the duty officer onboard Meeker County requested EOD support from Clearance Diving Team Three (CDT 3) which was located at the Harbour Entrance Control Post (HECP). The Officer in Charge, Lieutenant Ross Blue, together with POCD John Kershler and ABCD Gerald (Jock) Kingston responded, arriving at the ship at 0315. While Blue was briefed by Meeker County’s Commanding Officer, Kershler and Kingston inspected the line which they were surprised to find was nylon, as new and bright white. Seeing the line leading under the ship Kershler realised there could be a serious problem and decided to dive immediately.

Delong Pier, Vung Tau with ship alongside in the foreground where Meeker County would have been and local power generating ships in right background. (R Blue collection)

He followed the line under the ship for about 10 metres and found a black plastic package the size of a large brief case (0.6m x 0.3m x 0.15m). The charge was positioned about one metre under the engine room and was slung between the nylon line leading forward and another line leading aft under the ship and tied to the port rudder post. He estimated the charge was about 20 kg of explosive with fishing floats secured to its side to make it neutrally buoyant and easy to manoeuvre in the water.

On surfacing, Kershler advised Blue what he had found and the urgency of the situation in that the charge could explode at any time. Blue ordered a nearby Military Police Patrol Boat Riverine (MP PBR) to take hold of the line while Kershler dived back down to the charge and cut the aft support line. The PBR then hauled out to the ship’s port side and drew the charge under and clear of the ship around 0340. Clearing the threat in 25 minutes of arriving was testimony to the competence and expertise of the three team members.

Blue then took a MP skimmer boat, shortened the tow to 10 m to ensure the charge did not hit the sea bed and, after ordering a search of the ship’s waterline in his absence, proceeded about 1000 m to seaward and secured the charge to an empty barge clear of the main shipping channel. The charge was secured by a 30 m line to the barge and marked with an additional buoy. The MP BPR was ordered to keep the area clear. Meanwhile back at Meeker County a snorkel had been found by Kingston. 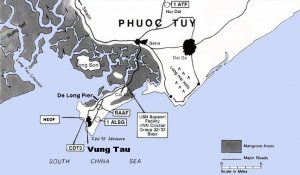 The plan was to wait for high water at 0950, move the charge to a mud bank and wait a further five hours (leaving more than 12 hours since it was laid) before examining it closely. Kershler completed his waterline search of Meeker County around 0415 and a search of the piers and minor vessels alongside was begun. 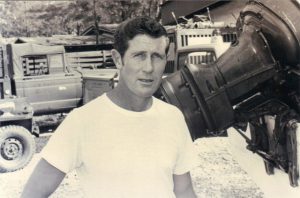 At 0430 Kershler and Kingston, in the skimmer, searched the waterline of Caney and Sebee, two converted tankers which provided electrical power to Vung Tau and surrounds and were permanently moored to the south of the pier.  Kershler was informed by a crewman that he had seen two men on the nearby mud flats. The area was illuminated but nothing was found. The searches were complete by 0530 and Kershler and Kingston returned the HECP to collect more diving equipment. On their return they were offered breakfast which was interrupted at 0715 by a report from the MP PBR that the charge had detonated throwing up a 15 m plume. No damage was caused.

At 0745 Kershler and Kingston continued to search all the other ships in the vicinity, as well as conducting sea bed searches near Meeker County to look for possible attacker’s bodies. All searches were completed by 1010 with nothing found, and the team returned to their base. This would be CDT 3’s last major incident at Vung Tau as in August 1970, after being relieved by South Vietnamese Navy personnel, the team and their equipment were airlifted to the northern city of Da Nang in I Corps where the war was much more intense.

But for the alertness of a sentry the attack would have succeeded. No doubt the two swimmers were dropped from a Junk near the Delong Pier and swam underwater, using snorkels, towards the target. Whilst the charge was neutrally buoyant the two lines in the water would have been heavy and made the approach more difficult. Notwithstanding, the two arrived at Meeker County undetected and successfully laid the charge under the ship. This would have been testing without diving equipment and involved close co-operation as one swimmer secured his line underwater aft, while the other swam up the ship’s side and under the forward section before hauling the line taut. Their undoing was the use of the bright white plastic line which enabled the sentry to spot it during the night. Their escape is testimony to their stamina, water skills and drive. 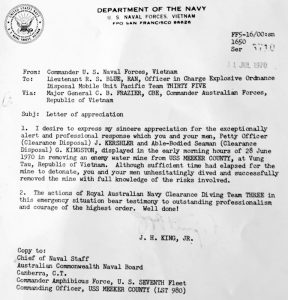 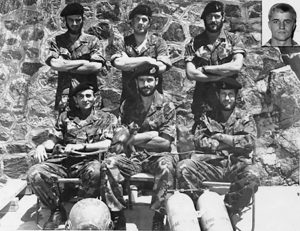