Vietnam has its own massive MIA problem. The government of the Socialist Republic of Vietnam estimates that about 300,000 Vietnamese soldiers remain MIA since the end of the war. In Vietnamese culture, those who die and are buried in unknown graves are thought to be ‘wandering souls’ unable to find rest in the spirit world until the necessary rituals are performed at their burial site by their kin. The Operation Wandering Souls project aimed to reciprocate the help given to Australia by assisting Vietnam to locate those of its MIAs who died in battle against Australian and New Zealand forces. This would allow the souls of their MIAs to find rest.

Why return these items?

How you can help

If the item you collected on the battlefield carries the name or other identifying information about the Viet Cong or People’s Army (VC/PAVN) soldier who once carried it, and you can recall something about the contact or the circumstances by which you acquired the item, the project team may be able to use that information to identify the burial site or establish the identity of the VC/PAVN soldier. The team may also be able to return these items to family members, giving them a tangible connection with their lost relative.

What should you do?

Please rummage through your old steel trunk or wherever the items are, find them and send them to the Operation Wandering Souls team along with as much as you can recall about the circumstances by which you ‘captured’ them. Alternatively, you can scan them and send the scanned image by email to the research team. You can contact the Operation Wandering Souls research team on the email address below or through this website. If you would prefer, you can send the items to the team anonymously.

What sort of items should be returned?

The items to be returned include any documents or artefacts that are of a personal nature (such as letters, personal diaries, poetry, drawings, notebooks, photographs, etc.) that were found on the battlefield or removed from bodies. Other items might include hammocks, torches, or other items, particularly if they have a name on them or you know some details of the contact in which they were captured. These items might help to identify the burial site of the VC/PAVN soldier who carried them during the war.

What the Operation Wandering Souls team will do 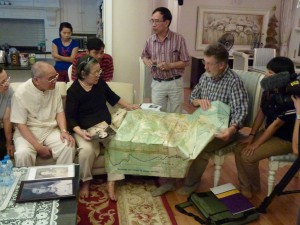 Bob Hall uses a topographical map to show a Hanoi family where their brother died in battle in an ambush set by New Zealand infantrymen in the Nui Dinhs. A photograph of their brother, held by his sister, was captured after the ambush. In this case, the captured photograph and details of the contact in which it was captured, have allowed the family to attempt to recover their brother’s remains from the ambush site. A six-figure grid reference in the contact report records the best available information about the location of the contact.

We’ll receive any item you send and create a facsimile copy or photograph to be retained at the University of New South Wales (at the Australian Defence Force Academy). We can also provide you with a facsimile copy or photograph if you would like. After providing a scanned image of the item to our contacts in Vietnam (so that they can begin the process of identifying family members) we’ll take or send the items to Vietnam for presentation to the family or to the Vietnam People’s Army which has a Hanoi-based unit dedicated to the identification and location of those of its soldiers still listed as missing in action.

If we are able to locate Vietnamese family members, you might like to visit Vietnam with us (at your expense) and personally return the items to the family.

What this project is NOT about

This project is not about fighting the war again, or about ideologies, or about how the communists treated those in the south after 1975; it is about our dealings, as decent, compassionate people, with the Vietnamese and how we treat our fellow men and women.

This is a healing opportunity and those who are able to participate will become part of one of the closing chapters of this conflict.

We invite you to participate in the return of the items if you have them.

Our research team consists of: 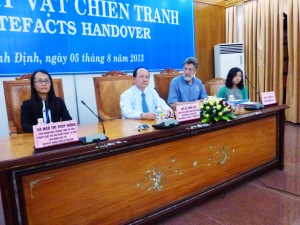