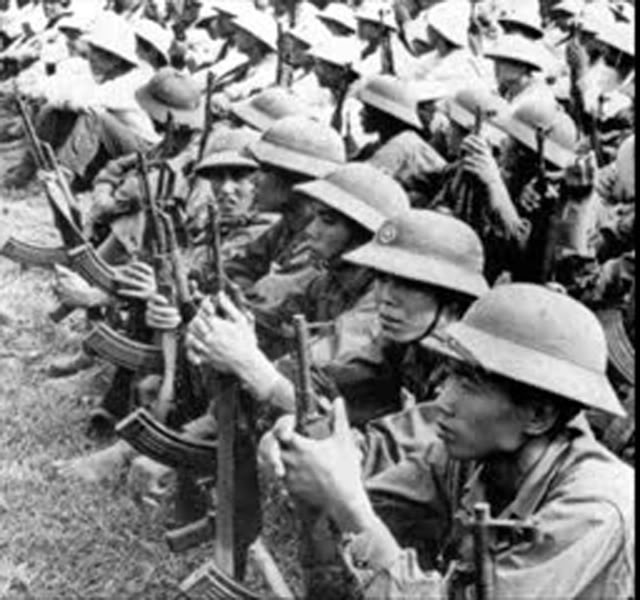 On 12 May, we discovered a battalion of Royal Australian troops had deployed to South Sở Hội (six kilometres north of Tân Uyên), and the Regiment was ordered to launch a night attack. The night was dark, and the regimental commander – Doãn Khiết, together with the battalion commanders and the reconnaissance element went to study the battlefield. On the way, they encountered commandos and interdicting artillery fire that blocked their approaches to the target. Political Officer Nguyễn Văn Nhật and Chief of Staff Hà Xuân Trường guided the troops to occupy the battlefield. At 0300 a.m., the 1st Battalion and the 16th 82mm Mortar Company were still far away and had not reached the battlefield in time, but the Regiment was determined to commence firing. At 4.30 a.m., the order was given to open fire, and all types of our firepower continuously fired upon the targets at an intense rate. The enemy – having just arrived and with their defences not yet complete, came under our heavy shelling. They abandoned our objective and fled helter-skelter. Immediately seizing the opportunity, our infantry sections – with overwhelming bravery, assaulted and wiped out the enemy. After 30 minutes of combat, we were completely in charge of the battlefield – and then swiftly withdrew our forces so that the enemy’s aircraft and artillery could not react in time. The battle concluded quickly. We wiped out an Australian battalion, captured a prisoner, seized eight weapons (including two heavy machine guns)[2], a 60mm mortar, and an 81mm mortar. … The battle was truly deserving of the award of the Liberation Military Exploits Medal 3rd Class (Huân Chương Quân công Giải phóng hạng 3). 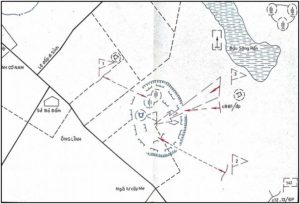 The 141st Regiment History included a sketch map of the first Battle of Coral/Sở Hội on 12/13 May 1968. Throughout the War, the NVA/VC used “Warsaw Pact-style” map-marking symbols – with some Vietnamese variations. In the preceding sketch map, a single enemy (Australian) battalion headquarters is shown within the FSPB (ie a triangular flag “flying” to the left) – together with the enemy (Australian) artillery and mortar positions, and two medium tanks. In “red”, the headquarters of the 141st NVA Regiment is depicted in the bottom right corner. Its three battalion headquarters – 1, 2, and 3, are shown in “red” as triangular flags, “flying” to the right. This 141st NVA Regiment sketch also omits HQ 3RAR and 161 Battery RNZAA within the FSPB Coral perimeter, and does not show the 1RAR and 3RAR companies outside the perimeter. HQ 3RAR and its D Company were, in fact, located about “300 metres” west of HQ 1RAR and were “not subjected to any ground attack”.[4] In the 141st NVA Regiment diagram, barbed wire is indicated around the northern, eastern and southern perimeter of FSPB Coral on 13 May 1968. However, the Australian Army official history relates that on 12/13 May:  “No claymore mines or barbed wire had been laid for the defence of the fire support base; there had been no time and, in any case, the wire had not arrived.” [5]

A further short article ie on The Battle of Coral (Sở Hội) – 16 May 1968, is in preparation and will be offered to “Australia’s Vietnam War” shortly.

[3] A somewhat different Vietnamese sketch map of the NVA attack on Coral was also published in a general Vietnamese history of the War ie “A Number of Battles in the Resistance War” 1991. That sketch map was earlier uploaded to the ADFA/UNSW website (with a commentary)  – see the Community Images section – image 16/50.