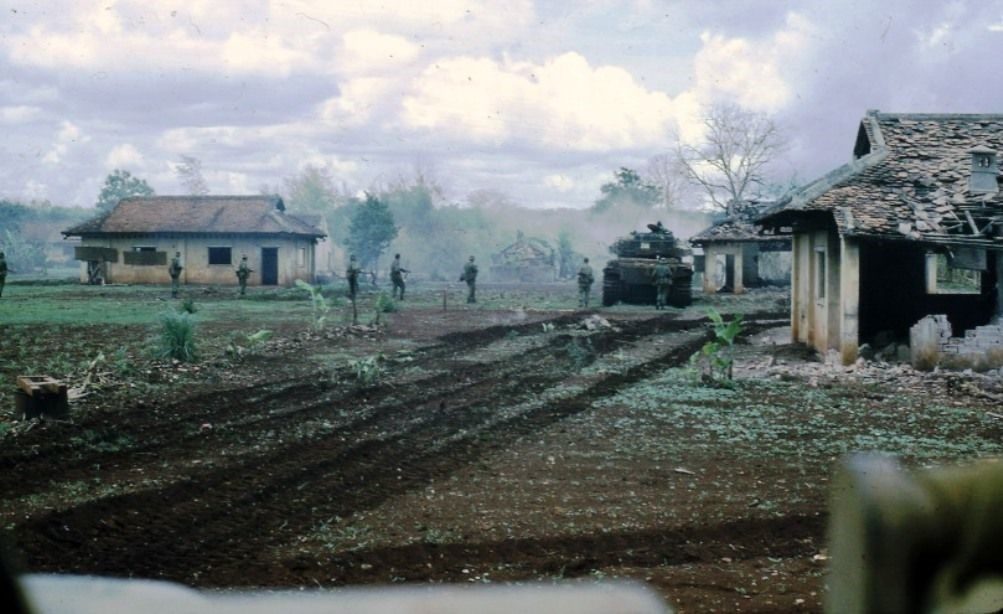 What we call ‘the battle of Binh Ba’ was fought 50 years ago. Elements of 33 PAVN Regiment occupied the hamlet of Binh Ba on the night of 5/6 June 1969.[1] At 0810 hours on the morning of 6 June, two 1ATF armoured vehicles of 4 Troop, B Squadron, 1 Armoured Regiment – a Centurion tank and an Armoured Recovery Vehicle – were fired on by an RPG-7 as they drove north along Route 2 towards Fire Support Base Virginia. The tank turret was hit by an RPG fired from the houses in the south-east corner of the hamlet, causing the loader/operator to be seriously wounded. The vehicles engaged the source of the RPG fire with machine guns. The tank continued north along Route 2 to the Duc Thanh District Post where Dustoff was arranged for the wounded man. The Armoured Recovery Vehicle withdrew south from the contact and returned to Nui Dat.[2]

Two platoons of RF/PF troops moved south from the Duc Thanh District Post with the intention of ejecting the enemy force from Binh Ba. However, as they approached Binh Ba they were heavily engaged by RPG and small arms fire indicating a substantial enemy force was occupying the hamlet. The RF/PF troops took up blocking positions to the north of the hamlet. They estimated enemy strength inside Binh Ba to be two platoons. With this information, the District Chief requested 1ATF support to clear Binh Ba hamlet.

The 1ATF Ready Reaction Force consisting of elements of 1 and 2 Troop, B Squadron, 1 Armoured Regiment forming a composite Troop of four tanks, 3 Troop, B Squadron, 3 Cavalry Regiment and D Company 5RAR under the command of Major Murray Blake, was assembled and briefed for the mission. At about 1000 hours, the Reaction Force moved north along Route 2, receiving fire from the enemy as they passed through Duc My about a kilometre south of Binh Ba hamlet. The force paused near the south-east corner of Binh Ba while efforts were made to encourage civilians to leave the hamlet. While there the force received some long range fire from within the hamlet. Eventually, with most civilians having left the hamlet, the District Chief agreed the Ready Reaction Force could launch its assault. 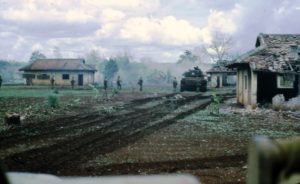 1ATF tanks and infantry assault through the hamlet of Binh Ba

Meanwhile, B Company 5RAR had joined the battle and had taken up blocking positions to the south of Binh Ba. Helicopter gunships of 9 Squadron RAAF had also joined the fight.

The following morning, 7 June, after a skirmish near the south west corner of Binh Ba hamlet, the combined infantry and armoured force again assaulted through the hamlet from west to east to flush out any enemy who may have still been occupying positions within the hamlet or had re-entered the hamlet during the night.

At about 1300 hours fighting broke out at Duc Trung – the rubber processing plant and worker housing area about one kilometer north of Binh Ba hamlet. Elements of the 1ATF force moved north up Route 2 to support RF/PF troops engaging the enemy there. However, civilians were still in the area and it was decided to withdraw the 1ATF elements from the assault. The ejection of the enemy from Duc Trung was to be left to the RF/PF troops who were much better able to communicate with the civilians still intermingled with the enemy. They would be better able to avoid unnecessary civilian casualties.

The next day, 8 June, a further sweep of the houses in Binh Ba hamlet was conducted and 1 Australian Civil Affairs Unit dispatched a medical aid team and a damage assessment team to Binh Ba hamlet to treat civilians and assess the requirements to restore damaged building to habitable condition. A major Civil Affairs effort developed over following weeks to repair or re-build damaged houses, restore electricity and generally clean up the rubble and rubbish the battle had produced.

While these final sweeps were being conducted in Binh Ba, a further battle broke out on 7 June in Hoa Long to the south of the Nui Dat base. Elements of the enemy’s Chau Duc District Company had entered the village overnight and occupied the north-west quadrant of the village. A ‘composite’ 2 Troop, B Squadron, 1 Armoured Regiment, 3 Troop, B Squadron, 3 Cavalry Regiment fresh from the fighting in Binh Ba, and C Company 5RAR under the command of Major Claude Ducker, was sent to Hoa Long to eject the enemy in support of the local RF/PF troops.[3]

Other incidents occurred during the battle. The Nui Dat base was hit with a volley of rockets, Fire Support Base Thrust, south of Dat Do, received a volley of mortar rounds, road block were erected on Route 15 and some RF/PF posts were attacked. Clearly, these events were coordinated and although the major fighting was concentrated in Binh Ba hamlet, the enemy conceived of the incident as being much broader than the events that occurred within the hamlet itself.

What was it all about?

Why had 33 PAVN Regiment suddenly appeared in the sleepy hamlet of Binh Ba? Why had it stayed and fought against a combined arms team of tanks, APCs and infantry supported by artillery and helicopter gunships? At the time, Australian commanders and their intelligence staffs were unable to find what they regarded as a sensible reason for the enemy’s actions.[4] Some thought 33 Regiment had occupied Binh Ba to escape the pressure from 1ATF’s Operation Lavarack, to the north. It was also thought that this aim might have been combined with an attempt to ambush 1ATF traffic running north along Route 2 to Fire Support Base Virginia, and to demonstrate the enemy’s ability to occupy a hamlet whenever it chose.[5] But these assessments of enemy intentions failed to see beyond what was happening in Phuoc Tuy province. From 6 to 8 June there was a peak of enemy activity throughout the country. This was a sure indication that 33 Regiment’s occupation of Binh Ba and the subsequent three days of fighting were not due to local considerations.

Lieutenant Colonel Colin Khan, Commanding Officer, 5RAR believed that the enemy operation was probably mounted with one or both of the following aims:

A   As part of a country-wide offensive designed to influence current peace negotiations.

B   Relieve pressure to the north where 6RAR was blocking HQ 33 Reg[imen]t NVA from moving east to the base area.[6]

Though his comments were made without the opportunity for deep reflection or the benefit of information on what was happening elsewhere in Vietnam, Khan was near the mark with his assessment that the incident was part of a broader enemy campaign. However, that campaign had more to do with the meeting between Presidents Nixon and Thieu at Midway Island on 8 June, and the formation of the Provisional Revolutionary Government on the same day, than with the peace negotiations in Paris.

The date and place of the Nixon/Thieu meeting was disclosed by the US media on 19 May giving ample time for the PLAF/PAVN to organize their military response. As the date of the meeting neared, US media debated the substantive issues they thought might be discussed at the meeting. These included the timing and scale of unilateral withdrawal of troops from Vietnam and the possibility that the US might insist that the Government of South Vietnam accept a coalition with the communists. Both presented major opportunities for the NLF and DRV.

On 8 June, a meeting of NLF officials at Tan Lap village, Tay Ninh Province, announced the formation of the Provisional Revolutionary Government (PRG) of South Vietnam claiming that it was the true representative of the political will of the South Vietnamese people. The symbolism was important. Tan Lap village had been the site of the establishment of the National Liberation Front in December 1960. The PRG was immediately recognized by the Democratic Republic of Vietnam (north Vietnam). The launch of the PRG had been deliberately timed to coincide with the Nixon/Thieu meeting at Midway Island.[7] The battles of 6 to 8 June underscored that the PRG controlled forces capable of conducting major coordinated battles and that therefore the US and South Vietnam would need to negotiate with the PRG to end the war. A political solution, and one possibly resulting in the formation of a coalition government comprising representatives of the PRG and the South Vietnamese government, would have to be found.

[1] The village of Binh Ba consisted of four hamlets; Binh Ba, Duc Trung, Duc My and Suoi Nghe. Some Australian accounts of the battle incorrectly refer to the battle taking place in Binh Ba village. By 1971, the year for which we have the most accurate data, Ap Binh Ba housed about 197 families (consisting of 358 males, and 425 females) with a total population of 783. The total population of the village of Binh Ba, including the four hamlets, was approximately 2,300. See AWM304, item 83, Binh Ba – Duc Thanh District. Binh Ba Ground Team Report 31 May – 4 Jun 71 (inclusive) for details.

[3] A more detailed discussion of this aspect of the battle is forthcoming.

2 Comments on “Strategic context: The battle of Binh Ba”