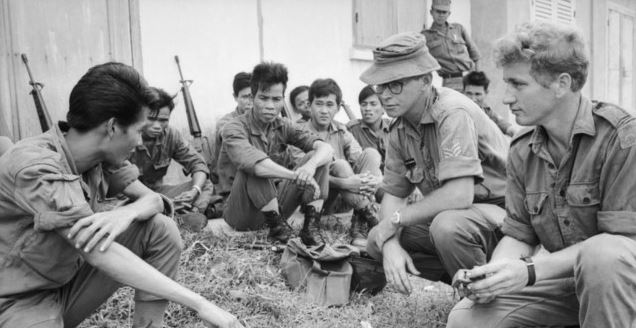 In July 1968 the Psyops advisor in Phuoc Tuy Province, Major Desmal C. Smith Jr. was nearing the end of his tenure in the job. He was writing his end-of-tour report giving an overall assessment of progress and recommendations for change and improvement. He argued that the achievement of physical security was the key to improving pacification in the province. He noted that there were adequate Regional Force and Popular Force troops[1], ARVN, National Police and other militia forces in the province – sufficient to provide a company per village – but the VC still enjoyed complete freedom to move around the province. He argued that this was recognized by the people and was the cause of the people’s failure to openly support the government.

He concluded his report with a plea:

There is one group of military within the province that has the admiration and respect of all the citizens to include the [Viet Cong Infrastructure and Viet Cong/People’s Army of Vietnam] units. This group is the 1st Australian Task Force. The quickest way to bring pacification to Phuoc Tuy Province is to give the mission to the 1st ATF. Make the Province Senior Advisor and all district and Company advisory positions Australian positions. I know this recommendation will be frowned on and only cause me to lose more skin off my own nose, but it would work because the Australians would make it work. The only problem of trying it and seeing it work would be that we the Americans would look like hell in the other 43 provinces where our efforts and plans have failed to work.[2]

Whether Smith’s endorsement of Australian capability was well-founded is unknown. His plea was never implemented. Though there was later discussion about the possibility of Australia taking over the advisory role throughout Phuoc Tuy Province this was rejected as being beyond Australia’s capability. But beginning in May 1969, US strategy changed to one of pacification and this freed 1ATF to apply its counter revolutionary warfare doctrine and take a much more aggressive role in pacification throughout the province.

Australian doctrine for the conduct of counterinsurgency was well-established by 1969. It was published in The Division in Battle, Pamphlet No. 11 Counter Revolutionary Warfare, 1965.[3] Although the doctrine did not use the word ‘pacification’ it nevertheless set out a series of measures which closely fitted the pacification model. It recognised that:

The main part of the struggle is political. Counter insurgency operations are simultaneously political and military in their nature. There is no purely military solution.[4]

It went on to emphasise the need to establish security of the people, pointing out that in addition to mobilizing the full national potential against the insurgency and winning the support of the population

The enemy must first be cleared from a selected area, control obtained, and the population and local leaders won over, as an example of a military and political base from which the counter insurgency effort can be encouraged to spread.[5]

But it warned that no single program, whether political, psychological, social, economic or military will be sufficient in itself to counter an insurgency. Instead, all of these counter measures had to be applied in a balanced and effective way.[6] This required careful coordination of effort between the military, the local security forces and the government.

Change to US strategy

However, since the Task Force’s arrival in the province in mid-1965 it had been obliged to conform to US operational control, and US strategy. Thus, under General Westmoreland, Commander, US Military Assistance Command Vietnam (COMUSMACV) until July 1968, its priority task was the defeat of enemy main force elements deep in the jungle. The Task Force was unable to operate in the populated areas in the south of the province unless specifically invited to do so by the Province Chief.

Following the replacement of General Westmoreland by General Abrams and the ascent of Richard Nixon to the Presidency, US strategy in Vietnam underwent a change. The change was enabled by the heavy losses suffered by the enemy particularly during the Tet Offensive (January-February 1968) and ‘mini-Tet’ (May 1968) and encouraged by Nixon’s determination to withdraw US forces from Vietnam and end the war.[7] The enemy losses in 1968 caused large-scale operations to diminish although they did not cease altogether. However, this lower level of combat scale tended to free US and Free World forces to adopt a strategy oriented more towards pacification than had previously been possible. Major battles such as the battle of Hamburger Hill, the Cambodian incursion and later ARVN thrust into Laos during Operation Lam Son 719 continued, but by April 1969, Abrams launched his ‘one war’ concept in which the top priority was to be the provision of security to the people, a classic pacification aim. Second priority was training ARVN, and now relegated to third priority, was the conduct of operations against enemy main force elements.

While 1ATF had been conducting operations against enemy main force elements deep in the Phuoc Tuy jungle, the situation in the populated south of the province had been deteriorating. Pacification had been the responsibility of those South Vietnamese security forces that Major Desmal Smith had identified as failing to prevent free Viet Cong movement throughout the province despite their numerical superiority. In March 1969 an analysis of the progress of pacification in Phuoc Tuy Province was conducted by US Colonel Robert M. Montague, Executive Officer, Civil Operations and Revolutionary Development Support (CORDS). Montague’s report confirmed Smith’s observations made eight months earlier. Montague wrote ‘based on … visits to all provinces … Phuoc Tuy is probably the poorest run of all’.[8] He continued:

All is not rosy in Phuoc Tuy. Based on provincial resources available the province leadership has not produced satisfactory results. Since Jan[uary] 68 Phuoc Tuy has had the capabilities to produce outstanding results; it has not done so. Therefore, barring major changes in Province leadership, little appreciable improvement can be expected.[9]

Montague then set out how Phuoc Tuy compared with other provinces. Although it was sixth out of 44 provinces in terms of RF strength, seventh in terms of PF strength and fifth in terms of National Police strength, it was 42nd out of 44 in Chieu Hoi (rallier) returns, and 36th in Viet Cong Infrastructure neutralizations. It ranked near the bottom in a range of other measures as well.[10] Clearly the RF/PF and other ARVN forces in the province were failing to deliver security despite their seeming numerical advantage.

Now alerted to the problem, General Julian Ewell, Commander II Field Force Vietnam, urged that the problems be fixed. In

his May 1969 memorandum to subordinate commanders he wrote:

In Phuoc Tuy Province I’ve asked Brigadier Pearson [Commander, 1ATF] to do whatever he can to get things straightened out. That Province is now in the disaster category.[11] 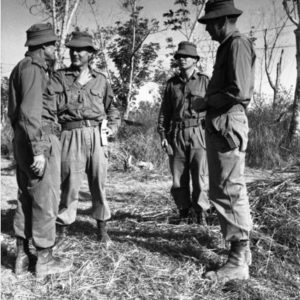 1ATF had gone from being excluded from the populated areas unless specifically invited to now being urged to fix the problem there.

With these changes, 1ATF was free to apply its counter revolutionary warfare doctrine as intended and this resulted in a flurry of pacification activity. The focus of 1ATF operations shifted from the jungle to the populated south of the province. A network of defensive bunkers and barbed wire fences was built around Dat Do and other villages. Land clearing around the foothills of the Long Hai hills opened new areas for farming and reduced the cover for enemy patrols attempting to enter the villages. Training of RF/PF and joint 1ATF/ARVN operations were accelerated to improve their combat performance. Ambush patrols were conducted around villages. The province road network was improved to stimulate commerce and boost the local economy. These initiatives met with varying degrees of success. 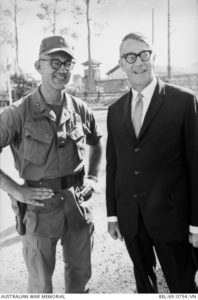 One of the results of this change in strategic emphasis was the creation of the Phuoc Tuy Pacification Committee. With growing concern about the failure of pacification in the province until early 1969 under the control of the South Vietnamese government and security forces, Major General Hay, Commander Australian Force Vietnam, wrote to the Australian Ambassador, Ralf Harry, suggesting that a committee be established involving  representatives of HQ AFV Saigon, the Australian Embassy and HQ 1ATF to meet monthly. The meetings were to alternate between Saigon and Nui Dat. Harry immediately agreed and the first meeting was held on 11 June 1969. The role of the meetings was to coordinate the pacification effort and to closely monitor progress.[12]

At each meeting reports were received on the security situation, psychological operations, civil affairs, the Chieu Hoi program, the Phoenix/Phung Hoang program, refugee resettlement, economic development, political developments and other factors. Although 1ATF never achieved the thorough integration of all of these elements with the military response as described in doctrine set out in Counter Revolutionary Warfare, it did achieve a significant improvement on the situation pre-May 1969. These reports now form a valuable record of the fluctuating state of pacification in the province until the withdrawal of the Task Force.

Although pacification was generally successful in reducing the effectiveness of the Viet Cong, it was not decisively so. When 1ATF was finally withdrawn from the province the RF/PF and ARVN were performing better than they had in the pre-May 1969 period. But the Viet Cong and the Viet Cong Infrastructure, though diminished, were still functioning. They rebounded strongly during the PAVN’s 1972 Spring – Summer Offensive, a major conventional attack launched in March 1972. Pacification strategies are complex, involving political, social and economic change as well as military operations. To produce results they need to be applied over a lengthy period. Ironically, the switch to pacification came as the US began unilateral withdrawal of its forces from Vietnam.[13] Having won the 1968 presidential campaign with a promise to end the war and withdraw US forces, and facing the 1972 campaign for his re-election, Nixon ensured that all but a fraction of US forces had left Vietnam by November 1972. Likewise, 1ATF was withdrawn from Phuoc Tuy Province by late 1971. Pacification had been applied for only about two years. It was not long enough.

For those interested in further research in pacification in Phuoc Tuy Province, the following sources will be useful:

[1] For an explanation of these forces see the article ‘The ARVN: Was their performance misunderstood?’

[3] The Division in Battle, Pamphlet No. 11, Counter Revolutionary Warfare, 1965, Military Board, Army Headquarters, Canberra, 1966. It should be noted that while Australian counterinsurgency doctrine provided a sound basis, it required considerable adjustment if it was to be applied to the situation found in Vietnam. For example, the major battles fought in Vietnam, such as the battle of Long Tan or the battle of Binh Ba, were not foreseen in Counter Revolutionary Warfare.

[13] Nixon announced the withdrawal of 25,000 US troops from Vietnam on 8 June 1969. The withdrawal of these troops began the following month and was completed at the end of August. Further withdrawals followed. By late 1972 all but about 16,000 US personnel had been withdrawn from Vietnam.