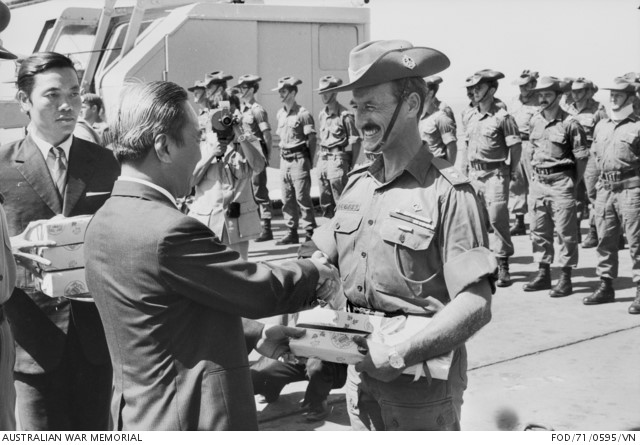 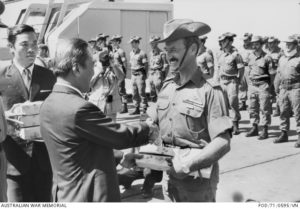 President of the Republic of Vietnam, Nguyen Van Thieu (left) presents a gift to the Commanding Officer of 4RAR/NZ (ANZAC), Lieutenant Colonel Jim Hughes, aboard HMAS Sydney in Vung Tau harbour on 8 December 1971, prior to the unit’s departure from Vietnam for Australia. The battalion departed Vietnam a little over two months after the battle of Nui Le.

We buried Jim Hughes last month. Sunny Jim, a man welcome at any Diggers’ booze up and the scourge of any flaky officer. The Colonel who took 4RAR/NZ (ANZAC) to Vietnam in 1971 and who came within inches of losing an entire company of 120 men to the dreaded 33 Regiment of the North Vietnamese Army (NVA). There are still people looking for this closure thing but Jim got all the closure anyone needs before God on that sunny Melbourne morning. And God would have been impressed.

What a magnificent day it was. It took me nearly an hour to walk to the church from the hotel and I thought of no one else as I moved through the dappled sunlight of Melbourne’s streets. In particular, I thought of the last time I spoke to him at his Battalion HQ on Courtenay Hill in Vietnam. I was an intelligence officer in 1 ATF and I was there to discuss a special agent report which had placed the entire 33 Regiment at the foot of the hill barely two hours earlier.

I opened by asking if those reports were true, where was the 33 Regiment now? A couple of dozen HQ staff maybe but 1500 heavily armed men? After looking closely at the plantation bathed in warm sunlight he agreed that they weren’t there: even for them, it would be impossible to conceal that many troops. Warming to my subject, I went on to remark that it was common for the NVA to hive off their HQ staff from the main body just before a major attack in order to deceive the enemy. He agreed with that too but neither of us went on to ask ourselves the most obvious question: if this was a deception party, where was the main body of the Regiment and where was it going to strike?

Twenty four hours later, D Company had found the rear of 33 Regiment’s position alright and was in a fight for its life. Jim Hughes and 120 of his soldiers had no further need of my insights.

The 33 Regiment had set a major ambush on Route 2 hoping to lure an Australian reaction force into a deadly trap but with no result. In fact, they were on the point of withdrawing when D Company stumbled upon their rear position and it was then game on, albeit a game that neither side had anticipated.

At this point, the reader needs to know a bit about 33 Regiment. This was the NVA unit that gave the Americans their first taste of real battle in the Ia Drang valley in 1966. As the US and ARVN would always have air and artillery superiority, the NVA concentrated on an area where they could achieve superiority; infantry field tactics. General Giap called this “seizing the enemy’s belt” where the NVA closed in with the enemy so closely that they dared not use airstrikes or artillery for fear of killing their own troops. Thereafter, the Vietnamese believed that their superior infantry skills would do the job. And they were usually right.

By late afternoon on 21 September 1971, they pretty well had D Company where they wanted them; almost totally pinned up against an impregnable bunker system with dozens of assault teams streaming into a creek bed behind them to close the nutcracker. One blast from the Battlefield Director’s whistle would launch hundreds of NVA troops into the poorly defended rear of D Company and it would all be over in minutes.

But that didn’t happen. Kept separated from his charts and radio by the zealous attentions of an NVA machine gunner, the artillery officer (FO) attached to D Company ended up lying face down in the mud in the rapidly gathering gloom of the forest doing the trigonometry for an artillery strike in his head (thank you Mrs Gibbs of the Maths class, Rockhampton High School) and then yelling the fire mission coordinates to the radio operator. A minute later, the distant stuttering of guns far to the west told him the shells were on their way but where would they land and would they be in time?

Well, the shells were in time and right on target even if they frightened the bejesus out of the rear elements of D Company. While they might not have terrified the assault teams of 33 Regiment, they must have given the Regimental Commander cause to reconsider. Accurate artillery fire and the rapidly falling night were both new factors and the lives of his men were not worth the risk. Furthermore, the Australians might well have been trapped but they would not go down without a hell of a fight. The assault teams were glimpsed going back out of the creek bed soon thereafter and by morning, the 33 Regiment had disappeared.

So where was Colonel Jim, the modern armchair strategist might ask? Well, physically he was on top of Courtenay hill anguishing about the fate of D Company but he had already made his most telling contribution during the previous two years. His sunny confidence that their best WAS good enough must have steeled many diggers in D Company during that long afternoon. Even when defeat and death seemed almost certain, the icy courage and skill of a young artillery officer saved their lives at the last minute. What’s not to like about being a member of 4RAR/NZ?

Obsessed with getting the Task Force out of Vietnam, Canberra’s treatment of awards was almost flippant. Jim got a DSO, an award he neither wanted nor needed, and other medals were duly sprinkled throughout the Company.

And the FO, the man who summoned up the last-minute rescue from the guns? He got nothing. Nothing at all.

So Jim, may your soul rest in well-earned peace. And should you come across the Commander of 33 Regiment, I hope you find his soul at rest too. You were both great leaders and It’s just that we got lucky, very lucky actually, in having an extraordinary FO and a commanding officer who so radiated confidence and discipline.

Henry IV once remarked cynically that Paris was probably worth a mass. Jim certainly was.