There is a lot of work involved. It will take us some time to fully develop the site but we’re confident that by the end of 2016 we’ll have a site that provides a unique understanding of the Australian and New Zealand campaign in Vietnam. 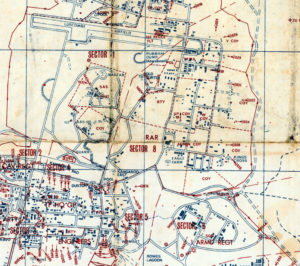 We are inserting new, detailed maps of Nui Dat, 1ALSG, Baria and Hoa Long as extra layers to the digital Battle Map. Visitors to the site will be able to zoom into Nui Dat to see where their unit was based, the individual buildings they worked in, the perimeter MG pits they stood sentry in, the perimeter wire and much more. Those who fought in Baria in Tet ’68 will be able to identify specific buildings such as the picture theatre, the water tower, and the CIA residence (OSA house).

Commemorating those who lost their lives

We will soon be able to add brief biographical details and photographs of all those Australian and New Zealand soldiers who died during their service in Vietnam. This data will be linked to the combat incidents or map coordinates and will enlarge the story about how these men and women lost their lives. Visitors to the site will be able to upload memories and photographs of their fallen mates.

We will continue to strive to make our site the best source of information about the Australian and New Zealand contribution to the Vietnam War. We are keen to hear your feedback, so please contact us if you have any suggestions or comments.

The Commonwealth of Australia has not participated in the research, production or exercised editorial control over the Activity or its contents. The views expressed and conclusions reached herein do not necessarily represent those of the Commonwealth, which expressly disclaims any responsibility for the content or accuracy of the Activity.