The following graph shows the comparative strengths of the Republic of Vietnam Armed Forces, US Military Assistance Command, Vietnam (USMACV) and other Free World Forces (including Australian and New Zealand forces).[1]

Even in 1965 when the Australian government deployed the 1RAR battalion group to Vietnam, the Republic of Vietnam Armed Forces (RVNAF) had already topped over half a million men and women. The RVNAF (shown in blue on the graph below) continued to grow throughout the campaign and by late 1973 had reached 1,048,000 men and women under arms. It is important to note from the graph that throughout the war the RVNAF considerably outnumbered the US forces in Vietnam. The scale of the RVNAF commitment to the campaign is remarkable given that the population of the Republic of Vietnam was only about 23 million.

US forces (shown in red on the graph) reached a peak at the end of 1968 of 536,000 men and women. The Nixon administration began unilateral withdrawals of US forces in mid-1969 and the number of US service men and women in Vietnam steadily diminished from that point. Nixon’s ‘Vietnamization’ policy – the passage of responsibility for the conduct of the war to the RVNAF – was a term coined primarily for US domestic consumption. The South Vietnamese had been carrying a very considerable share of the war effort since before the US deployment of ground combat forces to Vietnam and continued to do so long after US ground forces had been withdrawn. Both in terms of the total number of armed forces personnel and casualties suffered, the RVNAF exceeded US forces throughout the campaign. 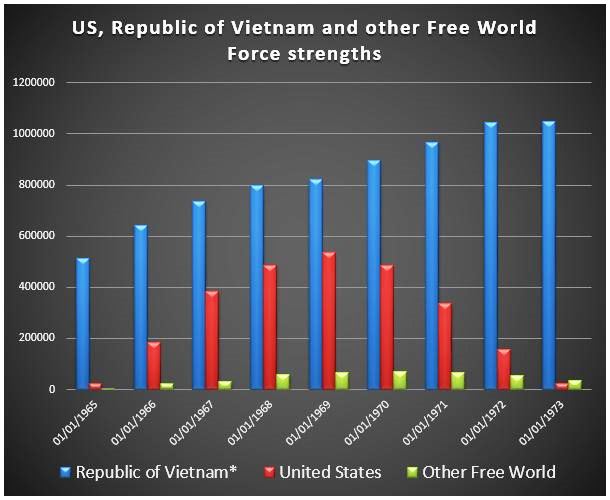 The massive contribution to the campaign made by the RVNAF is more starkly shown in the following graph comparing US and RVNAF casualties. The graph shows that between 1960 and 1974 there was no year in which RVNAF casualties were less than US casualties. The graph also shows that the RVNAF had been taking considerable casualties in the years before the commitment of US ground combat forces in 1965 and their casualties grew sharply from 1972 when most US forces had been withdrawn from the theatre. 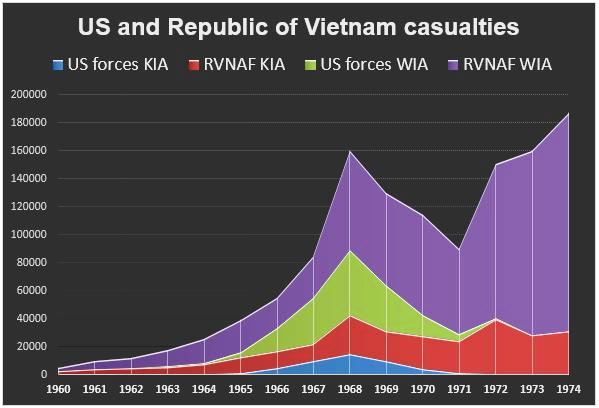 The effects of the Tet Offensive of 1968 can also be seen in the graph. Casualties peak for both RVNAF and US forces in 1968 but dropped over the following years until most US ground troops were withdrawn and the People’s Army of Vietnam launched its Nguyen Hue (Easter Tide) offensive of 1972.

Reasonably reliable year-by-year casualty figures for the People’s Army of Vietnam and the National Liberation Front are unavailable but it is likely that their total casualties were significantly greater than the combined US and RVNAF figures. Some estimates put the combined PAVN/NLF killed in action figure at about 1.1 million. Reliable year-by-year figures for civilian casualties are also difficult to find but it is estimated that total civilian casualties for both sides were about 2 million.

For further research on strength and casualty figures see:

[1] Shelby L. Stanton, Vietnam Order of Battle, US News books, Washington D.C., n.d., p. 333. The figures for the RVNAF include the Army, Navy, Marines, Air Force, Regional and Popular Forces, but do not include paramilitary formations such as the National Police, Civil Irregular Defence Group, Revolutionary Development Cadre, etc.