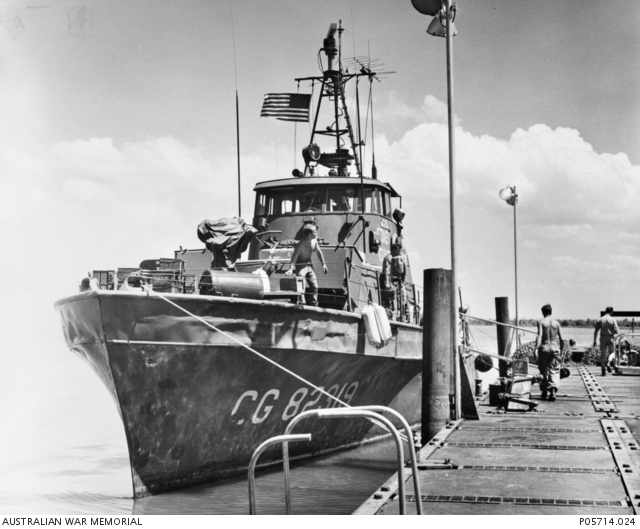 Lieutenant Robert Burns, RAN, officially assumed command of CDT3 on 25 August 1967 after receiving a handover from Lieutenant Shotter. On its first day as an independent unit, the second contingent was assigned to survey an area of Vung Tau Harbour to ascertain the viability of erecting a wharf and base for harbour patrol craft.

The next day, four team members participated in a Vietnamese Junk Force assault of Nui Truong Phi, a known VC stronghold 15 miles to the north east of Vung Tau and east of the Long Hai Hills. The purpose of this mission was to retrieve two captured US Army small craft, and the divers were required to ensure that they had not been rigged with IEDs. On the same day elements of 1ATF were conducting Operation ULMARRA in the nearby fishing village of Lang Phuoc Hai. Two Vietnamese Command Junks and three assault Junks carried the four CDT3 personnel and approximately 100 Vietnamese troops to a landing point. Offshore support was provided by swift boats and a Vietnamese gun boat.

The beach landing was hampered by heavy surf, which caused a Vietnamese Command Junk to beach, and was opposed by sniper and machine gun fire. One man was killed and nine wounded, including Able Seaman Trompp, the sole Australian causality, who was hit in the arm by a sniper’s round and later evacuated to Vung Tau. Continuing heavy fire prevented recovery of the small craft which were subsequently rigged with demolition charges and destroyed by the divers. The stranded junk was stripped of military equipment and abandoned. The force withdrew in a troop of APCs that were diverted from the 1ATF operation. A plan to salvage the beached Command Junk on 28 August was abandoned due to the still heavy concentration of enemy troops. It was later destroyed by naval gunfire and aerial bombardment. Able Seaman Trompp was the first RAN casualty of the Vietnam War, and after treatment returned to duty.

Petty Officer Donne and Leading Seaman Currie took part in a second Junk Force operation on 1 September. Personnel embarked in three junks from Coastal Group 32 and proceeded to sweep through an island one mile west of the Cat Lo Naval Base. Here the divers disarmed an American 81mm mortar round which the enemy had attempted to convert into a booby-trap. No enemy forces were encountered, although signs of enemy activity were evident.

On 13 September CDT3 personnel travelling by road were fired open by snipers. Fire was returned as the Australians accelerated away. Three days later the team took time out to visit the Vung Tau based Australian Logistic Support Group (1ALSG) and meet Lieutenant General Sir John Wilton, Chairman of the Australian Chiefs of Staff Committee.

Throughout September the monsoon season eased, enabling the team to take a more active role in STABLEDOOR. Unfortunately, damage to the team’s rubber dinghy necessitated personnel diving directly from harbour patrol craft which were generally unsuitable for the task. Between October 1967 and January 1968, CDT3 searched 1,154 ships, including a team record of 332 in December. 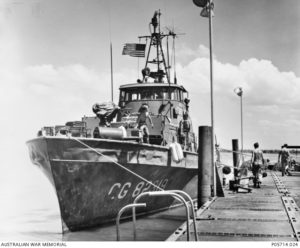 Clearance Divers often worked on US Navy and US Coastguard vessels as they completed a wide range of tasks including protecting shipping from VC sapper attack, recovering aircraft downed at sea and demolishing unexploded or damaged ordnance.

Reponses to false alarms were not uncommon in STABLEDOOR operations. In the early evening of 17 September, two Military Police guards on a merchant ship reported sighting an underwater ‘chariot’, with a single rider amidships, heading for Vung Tau’s northern anchorage. The guards engaged the ‘chariot’ with small arms before heavy rain obscured their vision. CDT3 personnel were alerted and searched the area, finding only a log with a vertical projection.

Towards the end of the September a full scale and air search of Vung Tau Harbour and approaches was conducted in response to a report of a floating mine. No mine was found but the incident led to 28 false alarms over the ensuing six days. All of these were taken seriously, giving team members ample opportunity to hone their skills with small arms, sinking all manner of floating objects including drums and hot water heaters.

On 3 October two team members were flown by a RAAF 9 Squadron helicopter to the south eastern corner of Phuoc Tuy Province to recover an Australian Army APC which had ‘drowned’ in 12 to 18 feet of water while crossing the mouth of the Song Rai during Operation KENMORE. The APC was successfully salvaged three days later.

Routine calls occupied CDT3 for much of October. They responded to call outs from Vung Tau Airfield Security to investigate suspicious objects in aircraft and also brought their underwater repair skills to the fore. A successful operation to salvage a Harbour Defence Patrol Craft took place on 15 October, and the propellers were changed on two Harbour Defence Picket Boats.

In late October, Lieutenant Burns attended a conference of in-country EOD Team Commanding Officers. The USN reorganised its EOD effort in Vietnam and CDT3 was designated Explosive Ordinance Disposal Mobile Unit Pacific (EODMUPAC) Team 21 for stores and material purposes. This designation later changed to Team 35. Another outcome of the meeting was a proposal that CDT3 remain at Vung Tau, supplemented by two or three USN personnel, but with added responsibility for mobile EOD for their part of the Mekong Delta.

CDT3 was called out to nine EOD incidents in Vung Tau in November, including five by Vung Tau Airfield Security requesting the removal of ordnance from a variety of locations. Petty Officer Donne sustained shrapnel wounds to his right hand while attempting to render safe a 75mm recoilless rifle fuse on 2 November. He was hospitalised for six days.

Between 27 and 30 November two team members joined a force of three swift boats and four junks from 32/33 Coastal Group, their mission to interrupt and capture junks resupplying VC units in the Ap Dong area. No enemy contact was made.

On 4 December Lieutenant Burns and Leading Seaman Currie were returning from Cat Lo Naval Base to Vung Tau when they encountered a jeep travelling at speed towing a boat which they immediately recognised as their own Boston whaler. Burns and Currie gave chase and after a two mile high speed pursuit they forced the jeep off the road and into a drainage ditch. The four would-be thieves were identified as US Army personnel from the 5th Special Forces Gamp at Long Hai. They were consequently escorted to Cat Lo Naval Base for questioning by Military Police.

Before the year concluded, Leading Seaman Currie spent one week on exchange with USN EOD teams at Nha Be and Cat Lai and was involved in the demolition of three bunkers. Able Seaman Zegenhagen also spent one week with the USN EOD team in Saigon and the US Army 3 Ordnance Battalion EOD team at Long Binh. The last assignment for CDT3 in 1967 was to search the anchorage before HMAS Sydney and her escort HMAS Yarra arrived in Vung Tau on 27 December.

CDT3 began January 1968 by responding to a number of EOD incidents at Vung Tau Airfield. Many involved the routine disposal of ammunition left behind in aircraft, while others involved the recovery of shrapnel damaged grenades from personnel who had been wounded in action.

On 24 January two members embarked in a helicopter gunship belonging to the 195th AHC. It was intended that the two clearance divers would be flown to a position 180 miles south west of Vung Tau to investigate a suspected floating mine. However, during a re-fuelling stop at Bac Lieu, some flares loaded from an ammunition supply point ignited. The aircraft was destroyed within three minutes, along with valuable personal, diving and demolition equipment.

Vice Admiral Sir Alan McNicoll, the Australian Chief of Naval Staff, visited CDT3 on 29 January. That evening, North Vietnamese and VC forces launched the Tet Offensive. While Cat Lo Naval Base came under fire from enemy forces occupying Long Son Island, Operation BLACK CAT, the codename for the defence of all naval units and merchants shipping, were put into immediate effect and Martial Law enforced. Throughout this period, the team was placed on a higher alert status. Several VC infiltrators were captured in Vung Tau and also at the airstrip and at Cat Lo Naval Base.

February 1968, the contingent’s final month of operations in Vietnam, saw several suspicious objects removed from USNS Corpus Christi Bay (T-ARVN1) and the freighter SS Sea Train Carolina. In other operations, the 1ALSG intelligence Officer reported on 9 February that a bridge over the Rach Hao waterway on Highway 15 had been mined. Team members responded, arriving on site to find that ARVN sentries had accidentally tripped the explosive charge while attempting to trace its source. The resulting explosion collapsed a length of railing, holed the road and damaged a bridge support.

The following day Lieutenant Burns and Able Seaman Trompp embarked in USS Lipan (ATF 85) to assist in the search for a USN P3B Orion aircraft which had crashed in the Gulf of Thailand. The second contingent’s final task involved destroying former French and Japanese cave and tunnel complexes on Nui Nho Mountain at Long Hai.