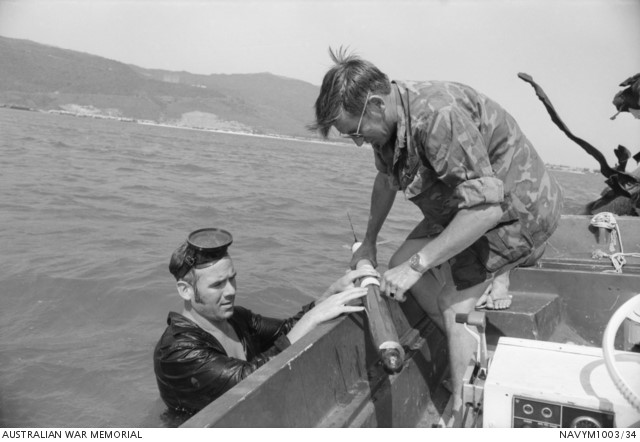 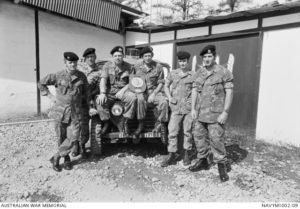 The eighth and final contingent arrived in Vietnam on 13 October 1970 under the command of Lieutenant Edward ‘Jake’ Linton, RAN, and assumed responsibility for CDT3’s operations on 29 October.

During October, three typhoons, Joan, Kate and Louise, had swept through the Da Nang area. Their combined force proved too strong for an ammunition barge which broke free from its inner harbour mooring and beached on a nearby sandbar. Tony Ey takes up the story:

Security personnel reported seeing a small but intense fire burning on the upper deck, so three members from the ‘new’ team were immediately dispatched to investigate. The old team having said they were ‘too short’ (going home) to take any more risks, the task fell to the new crew. I was driving the vehicle and took several wrong turns in trying to locate the Harbour Security wharf. This series of events fortunately delayed us by several minutes. As we were climbing aboard the waiting security skimmer boat to proceed to the barge, the barge detonated in a massive blast that shook the whole of Da Nang.

Had I been familiar with the most direct route to the wharf area, or had a member of the old team accompanied us, CDT3 would most certainly have lost three of its members that day.

The team was later tasked to recover the ordnance ejected by the explosion. They continued operations on the barge throughout the first three weeks of November. The original manifest came to some 150 tons of ammunition of varying calibres. Approximately half had survived the explosion and was left in a dangerous and volatile state. Most of this was recovered and disposed of, however, the general clean-up of the area continued on an ongoing basis until February 1971 as the ebb and flow of tides and currents uncovered more items.

On 28 October, CDT3 participated in another incident involving an ammunition barge. On this occasion, harbour security reported a suspicious sampan concealed between two moored barges. When the sampan tried to slip away, a short engagement ensued in which one of sampan’s occupants was killed and two others wounded. A search of the area by CDT3 revealed no IEDs or mines were present. The prisoners were interrogated and it was learned that their intent was to steal ordnance.

Jungle surveillance operations, of the type undertaken by the seventh contingent had by now been ‘Vietnamised’. Consequently, for the eight contingent, much of their work in the Da Nang area proved to be the rendering safe and removal of a variety of American ordnance, either damaged by handlers or simply left lying about. Lieutenant Linton was quick to observe that such items ‘abound in the most unlikely places’.

In November, CDT3 personnel were also occupied in salvage operations on a 115-foot harbour utility craft, YFU-63. The vessel had capsized in heavy seas and grounded on a stretch of beach east of the city of Hue. The vessel had been transporting 150 tons of ammunition, comprising white phosphorus, 105mm and 81mm rounds, from Da Nang to Tan My, a port facility near Hue. The crew of 12 perished in the incident. One body was later washed ashore on an island to the south of Da Nang, the remainder of her crew were unaccounted for.

Lieutenant Linton was placed in charge of salvage operations ashore. Supporting the operation at sea were USS Grapple (ARS 7), USS Cohoes (ANL 78) and the Philippine tug Trojan. The work to salvage YFU-63 was hindered by the advent of Typhoon Patsy, bringing the operation to a halt and shifting the wreck into such a position that it now made salvage uneconomical. Instead, an access hole was cut into the hull using oxygen acetylene torches and pneumatic chisels. A search by the divers of her internal compartments found no signs of the missing crewmen. The operation was terminated on 22 November and the wreck abandoned. Chief Petty Officer Gilchrist, Petty Officer Narramore, and Able Seaman Ey and Furner were each commended for their involvement in the salvage attempt.

Plans to salvage a stricken Vietnamese Navy minesweeper aground near the mouth of the Cua Viet River, south of the DMZ, were similarly abandoned. The Cua Viet had seen a good deal of enemy activity, including many successful mining attempts on American and South Vietnamese vessels. In November 1970, American EOD advisers recovered four enemy pressure mines from the Cua Viet, with five improvised ‘birdcage’ mines recovered by another EOD team in December. The Cua Viet remained a hot-spot and in a single operation allied forces killed 22 enemy sappers and took another prisoner. Information extracted from the sole survivor revealed that another 20 mines had been laid in the river, leading CDT3 members to correctly conclude that they too would soon see action in the area.

On 6 December the team’s monkey, WRAN EOD Fred, died after falling victim to rat poison placed beyond the compound fence, leaving ABCD Dog as the remaining mascot. The year concluded with two reported swimmer sightings on 14 and 30 December, both originating from Da Nang’s deep water piers. Both incidents resulted in thorough searches being conducted of the piers and nearby ships. Despite the second report being assessed as a definite sighting, no trace of enemy sappers were found.

At the beginning of 1971, Able Seaman Digney deployed with Vietnamese Navy EOD team 82/02 to the Cua Viet. Here he participated in salvage operations on a LCM 8 which had been sunk by a river mine. He also participated in mine sweeps between the river entrance and the city of Dong Ha. Elsewhere, Petty Officer Narramore worked with a USAF EOD team at Da Nang Air Base, while Able Seaman Ey accompanied a member of the Australian Training Team Vietnam (AATTV), on an operation in Quang Nam Province, south west of Da Nang.

On 11 January 1971 CDT3 personnel proceeded to Hoi An to dispose of small quantify of ammunition held at an American Military Provincial Assistance Health Program facility. Once this task was completed, the Hoi An Jungle Surveillance Group asked the team to inspect a bomb near the village of Lo Phuoc, situated well inland from Hoi An. The bomb had buried itself in 18 inches of soil. On inspection, it was found to be a 500lb low drag general purpose bomb, used to produce maximum blast and explosive effects. The bomb was left in situ and a recommendation made that the ARVN arrange for its removal. 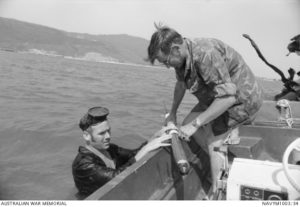 RAN Clearance Divers recovering unexploded ordnance from the water at Da Nang, South Vietnam. The sailor in the water is ABCD Tony Ey and the sailor in the boat receiving the 2.75″ rocket is CPOCD John Gilchrist, both of the 8th Contingent CDT3.

Sapper attacks in Da Nang Harbour were becoming more audacious. On 21 January a suspected saboteur was seen on the ammunition ship SS Halcyon Panther at anchor in the harbour. The intruder was seen to dive overboard and swim to an awaiting sampan which then circled the ship before making off. Petty Officer Narramore, accompanied by Ey, Furner and Digney, responded to a call to investigate the incident. The ship, carrying 8,320 tons of high explosives, was searched without result.

On 25 February sappers or drifting mines were responsible for a successful attack on two vessels moored together in the Cua Viet River, which killed seven people. CDT3 personnel assisted with salvage operations and the recovery of the bodies. Two further vessels were severely damaged in other attacks, bringing total deaths to 12.

On 5 March the wreckage of a helicopter was sighted in shallow water north east of Camp Eagle. Thought to be an aircraft from the unit based there, Petty Officer Narramore and Able Seaman Ey were sent to investigate with a view to recovering the crew. Airlifted with a security force to the scene, Ey dived on the wreckage, searching for bodies in what he described as a solution that was ‘literally liquid mud and as black as goat’s guts’. From the wreckage, the helicopter was identified as a UH-1C gunship, containing no bodies. It transpired that the aircraft had been downed during the 1968 Tet Offensive. 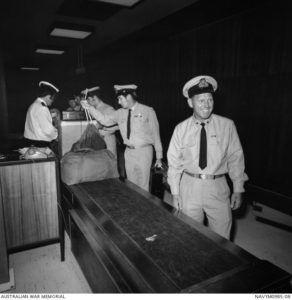 Looking pleased to be back home, members of the 8th Contingent, RAN Clearance Diving Team 3 (CDT3), have their luggage checked by Customs officers at Mascot airport, Sydney, after returning from their tour of duty in Vietnam. Lieutenant Edward Wilfred Linton, Officer in Charge, leads the group through Customs. He is followed by Chief Petty Officer John Gilchrist; Petty Officer Phillip Narramore; ABCD Anthony Ey and ABCD Brian Furner.

Returning to the Cua Viet on 26 March, a member of the team conducted a survey of the wreckage of a mine countermeasures vessel sunk by a pressure mine near Dong Ha. The vessel was assessed as being fit only for demolition, a task originally planned to take place in April. The unwillingness of the Vietnamese Navy to provide security or sweep the river, resulted in the team handing their explosives to a USN adviser to enable the task to be undertaken by the Vietnamese at a later date.

The Cua Viet and Song Vinh Dien rivers received much attention from sappers during March. There were 20 separate mining incidents on the Cua Viet and evidence of several other attempts to disrupt shipping. Five pressure mines were recovered, three by CDT3. In all two ammunition barges were damaged by limpet mines in addition to the mine countermeasures vessel already sunk. The Australian divers also recovered the bodies of two VC sappers killed by scare charges.

For their remaining month in Vietnam, the eighth contingent was involved in routine EOD tasks and hull and cable searches of shipping in Da Nang Harbour. As they became ‘short timers’, the team prepared for the impending disbandment of EODMUPAC Team 35 and their return to Australia. On 19 April 1971, the team disbanded and responsibility for EOD calls was transferred to the US Army. ABCD Dog was taken into the care of Mama-san, the team’s housekeeper, who was also the recipient of much useful equipment. The team arrived in Saigon on 21 April and was briefly incorporated into EODMUPAC Team 33 as part of a reaction force. The team flew out on 5 May 1971, bringing to an end the involvement of Australian clearance divers in Vietnam.