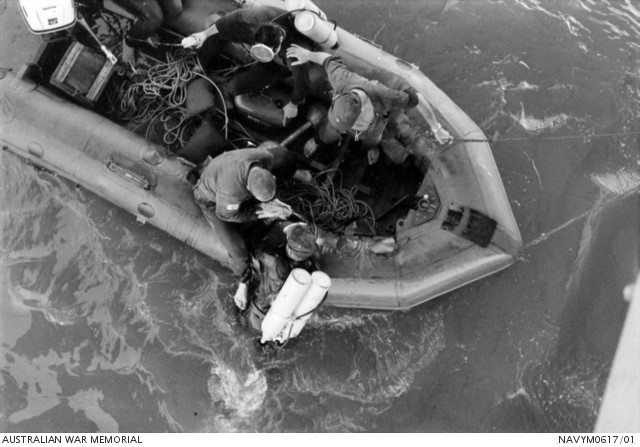 Lieutenant Littleton assumed command of CDT3 from Lieutenant Lees on August 28 1968. The introduction to STABLEDOOR operations for the newly arrived team was incident free, however, the period was punctuated by several VC attacks on shipping transiting the Long Tau Channel. The VC fired a combination of RPG rounds, and 107mm and 122 mm rockets, the latter known as the ‘flying trashcan’. This particular rocket was fitted with a 152-pound plastic explosive warhead plus an 18 pound TNT booster.

On 16 September team members were taken by PCF 28 to search for a Mohawk aircraft which had crashed into the sea about 400 metres from the village of Phouc Hai. The task was abandoned after three hours had been spent unsuccessfully searching an area of 60,000 square feet. 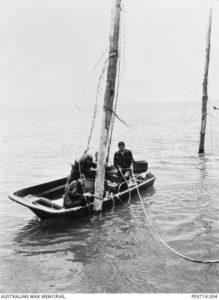 Thirty-five requests for EOD assistance were received in October, and many of these demonstrated the general state of carelessness prevalent at the time. The RAAF Base Support Flight delivered a cache of 23 grenades and 1,000 rounds of small arms ammunition that they had hoarded, ammunition was found ‘sculling’ around in aircraft, and in one instance a dud VC grenade, believed to have remained hidden for up to 18 months, was discovered behind the Red Dog Saloon at the Vung Tau airfield. Several calls came in the early hours of 19 October in the immediate aftermath of a 122mm rocket attack on Vung Tau.

Between 27 and 30 October Petty Officer Cox and Leading Seaman Rhook were detached to Vinh Long to support the salvage of a sunken monitor belonging to the Mobile Riverine Force (TF117). This coincided with a marked increase in enemy sapper attacks in the Mekong Delta, leading to a spectacularly successful attack on USS Westchester County (LST 1167) on 1 November near My Tho. This attack killed 25 and wounded 27. VC operatives struck again on 15 November, mining the American salvage vessel YLLC-4 on the Ham Luong River near the entrance to the Song Ben Tre. Petty Officer Cox assisted in the investigation of the sinking while on exchange with EODMUPAC Team 39.

The Americans lacked a set of standardised procedures to counter the threat posed by enemy sapper attack, in stark contrast to the Operation AWKWARD measures adopted by Australian warships whenever they frequented potentially hostile anchorages. The Commanding Officers of HMAS Ships Sydney and Duchess were briefed on recent developments when the ships anchored in Vung Tau on 20 November. A few days later Lieutenant Littleton was invited to the NAVFORV headquarters in Saigon to discuss anti-swimmer countermeasures. Similar discussions were held at TF115 Headquarters in Cam Ranh Bay in early December. Attacks continued on ships in the Long Tau Channel, and at Na Trang an explosive charge ripped a sizable hole in the bow of the Shell tanker Helisoma. Intelligence sources reported that a reward of 100,000 Piasters had been offered by the VC for the destruction of an American ship in Na Trang Harbour.

CDT3 remained busy in the lead up to Christmas. On 10 December team members entered the Rung Sat Special Zone north of Vung Tau to search for weapons and bodies of VC killed in an ambush. Among the items recovered from a sampan were four rudimentary snorkels, presumably for use by enemy sappers. On 19 December, the US military adviser’s compound at Dat Do came under attack from more than 100 mortar rounds and 107mm rockets. CDT3 was called in that morning to sweep the compound and dispose of any unexploded ordnance. 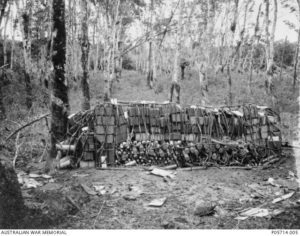 The New Year brought with it the amended operational directive which formally permitted CDT3 to participate in SEAL-type operations. Soon after, the newly promoted Chief Petty Officer Wilson, accompanied by Able Seaman Spicer, participated in one such operation, joining USS Leader (MSO 490) for operations in the Song Bo De area on the Ca Mau Peninsula, An Xuyen Province. Ca Mau was unquestionably VC territory, as US Admiral Elmo R. Zumwalt Jr reflected:

The US command had regarded the peninsula as so irremediably enemy country that it had evacuated as many of the inhabitants as possible and then bombed it with B-52s.

Wilson and Spicer were part of a five-man EOD team. With an underwater demolition team for company, their task was to destroy bunker complexes along a three mile stretch of the river. The operation was launched on 15 January and began with a one-hour napalm strike. A force of ten swift boats and a light helicopter fire team then probed the river before the EOD and underwater demolition teams were inserted. For the next six hours, the two teams destroyed 65 bunkers, 13 other structures, a concrete well and removed booby-traps as they were encountered. They came under fire from snipers on four occasions.

Petty Officer Cox and Leading Seaman Rhook detached to USS Washtenaw County (LST 1166) from 3 to 13 February for similar operations on the Ca Mau Peninsula, supported by swift boats, Huey Cobra helicopter gunship and a 40-strong contingent of Mike Force troops. During the operation, bunker complexes, firing positions, fortifications and targets of opportunity were destroyed along the river and canal banks. The impressive tally included 63 bunkers, 64 structures, 25 sampans, 42 irrigation dykes, one bridge and two stills. Additionally, 22 directional mines and 43 fragmentation grenades were captured and 53 people detained. At times the friendly force came under heavy enemy fire which killed one American adviser and wounded two Vietnamese troops. One swift boat, PCF 71, was sunk by rocket fire, but later salvaged and returned to operational service.

For the team members who remained behind in Vung Tau the core requirement to support Operation STABLEDOOR continued unabated. The events of late 1968 naturally raised the state of awareness among armed deck sentries and generated an increase in swimmer sightings and false alarms. One member of a USN EOD team was shot and seriously wounded by a deck sentry during a routine STABLEDOOR search at Cam Ranh Bay, and on 28 January 1968 CDT3 personnel were likewise shot at by overzealous sentries on board SS American Producer. A major shift in STABLEDOOR policy came in a direction specifying that ship inspections by EOD personnel would now be conducted between the hours of 0001 and 0400, this bring the most common time for swimmer attacks. Accordingly, night diving operations began on the evening of 4/5 February.

Members of the Fourth Contingent of the RAN Clearance Diving Team 3 (CDT3), work from an inflatable boat in Vung Tau Harbour, South Vietnam. The team’s tasks in Vietnam include ordnance demolition work, demolition of enemy bunkers, booby traps and mines, enemy prepared underwater obstacles, and the regular inspection of the hulls and anchor chains of ships anchored in the bay off Vung Tau.

On 23 February, the VC launched a widespread offensive, attacking more than a hundred cities, towns and military installations across South Vietnam with waves of rockets and mortars. Four rockets impacted in the Vung Tau area, three of which landed in the harbour. Three days later Lieutenant Littleton and his team handed over responsibilities for CDT3’s operations to the next contingent, and returned to Australia on 4 March.

The deployment of the fourth contingent coincided with a growing number of enemy swimmer attacks on shipping in Vietnam’s ports and harbours. In countering these attacks the Australians were able to make a valuable contribution to the efforts of the USN to develop standard doctrine for the defence of shipping against underwater attack. Furthermore, the team’s involvement in offensive special operations in the Mekong Delta established a foundation that their successors would build into a strong reputation for excellence.