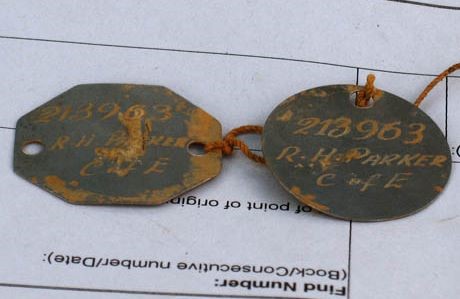 Reproduced with the permission of Army News, Department of Defence

At the end of the Vietnam War six Australian servicemen (4 Army and 2 Air Force) were still listed as “Missing in Action”. Between 2007 and 2009 Unrecovered War Casualties – Army successfully recovered the four Soldiers and two Airmen. The remains were repatriated to Australia and were laid to rest by their families. There are now no Australian Servicemen listed as missing in action from the Vietnam War. 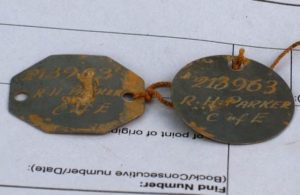 On 8 November 1965 A Company of the 1st Battalion of the Royal Australian Regiment encountered an enemy position in the Tui Gang Toi north-east of Bien Hoa in southern Vietnam. During the ensuing battle two of the company, Lance Corporal Richard Parker and Private Peter Gillson were killed but their bodies could not be recovered.

A Company was unable to return and retrieve the men’s bodies and they remained unrecovered until 2007.

Over several years an Australian veterans group – Operation Aussies Home – had visited the site of the battle to search for the men’s bodies. In April 2007 Operation Aussies Home uncovered and partially recovered human remains that were believed to be those of Richard Parker and Peter Gillson. An Unrecovered War Casualties – Army team was requested and quickly deployed to Vietnam.

The team, along with members of Operation Aussies Home, were into the third day of the excavation when a small piece of Army issue general purpose nylon cord (hutchie cord), the universal means of holding soldiers’ identity discs (dog tags) around their neck, was unearthed at the bottom of an excavation pit. The hope of the entire team was that the identity discs belonged to either Lance Corporal Richard ‘Tiny’ Parker or Private Peter Gillson.

After several days excavation on Friday 27 April 2007, the team had recovered two sets of human remains from a former Viet Cong weapons pit along with artefacts including both men’s ID tags and a Zippo lighter. The team’s forensic experts worked to identify the remains which were confirmed as those of Lance Corporal Parker and Private Gillson. On Monday 30 May 2007, Vietnamese officials and forensic experts in Hanoi confirmed the identification. 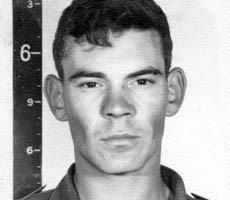 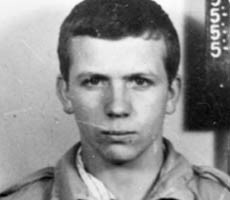 On Monday 4 June 2007, the remains of Lance Corporal Parker and Private Gillson were placed into a Royal Australian Air Force (RAAF) C-130 by a bearer party of soldiers from 1st Battalion, the Royal Australian Regiment, escorted with full ceremonial honours for their repatriation to Australia.

Present were Private Gillson’s widow, Mrs Lorraine Easton and her son Robert, and representatives from the Department of Veterans’ Affairs, Operations Aussies Home and the Vietnamese Veterans’ organisation.

After the ramp ceremony, the aircraft left Hanoi and flew to Darwin where the widows of both men and their extended families were able to privately spend some time with them. The C130 continued its journey to Sydney where a ceremony of welcome was held at RAAF Base Richmond. Several hundred Vietnam War veterans, as well as current serving men and women, were present to welcome home the two Australian soldiers. They were the first of six Australian servicemen who had been unaccounted for from the war in Vietnam. 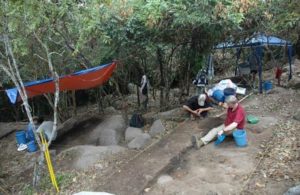 Helicopter crash site in the Long Hai mountains. Reproduced with the permission of Army News, Department of Defence.

Lance Corporal Gillespie was the medic on board a Royal Australian Air Force ‘dustoff’ helicopter that was shot down over the Long Hai Hills in Phuoc Tuy province in 1971.

The helicopter had been called to evacuate wounded soldiers of an Army of the Republic of Vietnam (South Vietnamese Army) unit in the Long Hai Hills. While winching one of the wounded soldiers for evacuation, the helicopter was hit by enemy ground fire. As a result of the enemy fire the aircraft engine stopped and it crashed to the ground and caught fire. Lance Corporal Gillespie was trapped in the wreckage and could not be rescued.

An Australian veterans group, Operation Aussies Home had already identified the crash site and Unrecovered War Casualties – Army had carried out an initial examination in early 2007.

In November 2007 the Unrecovered War Casualties – Army team, augmented by two members of Operations Aussies Home, returned to the Long Hai Hills, now called the Minh Dam Mountains and after a thorough search of the site recovered the human remains of Lance Corporal Gillespie. On Wednesday 5 December 2007 Vietnamese forensic experts in Hanoi confirmed the Australian team’s conclusion that the remains were those of Lance Corporal John Gillespie.

Arrangements were quickly made to enable the family to have John home for Christmas. The new Minister for Veterans’ Affairs, the Honourable Mr Alan Griffin MP and Commander 1st Division, Major General Richard Wilson (representing Chief of Army), accompanied Lance Corporal Gillespie’s widow Mrs Carmel Hendrie and his daughter Fiona Pike to Hanoi where a repatriation ceremony, hosted by the Australian Ambassador, was held. Also present were representatives from the Department of Veterans Affairs, Operation Aussies Home and the Vietnam Veterans Association. A bearer party of soldiers from the 1st Combat Service Support Battalion carried Lance Corporal Gillespie’s casket onto a Royal Australian Air Force C130 aircraft which departed for Australia on Monday 17 December 2007.

After quiet time in Darwin for the extended family, Lance Corporal Gillespie’s remains were welcomed home in a moving ceremony at Point Cook RAAF Base near Melbourne on Wednesday 19 December 2007. Again, a large crowd of Vietnam Veterans and currently serving men and women were present to see another Australian casualty of war finally brought home to rest. The officer commanding the honour guard for Lance Corporal Gillespie’s return was Second Lieutenant Robert Gillson, the son of Private Peter Gillson whose remains had been recovered in Vietnam by Unrecovered War Casualties – Army in April 2007.

Lance Corporal John Gillespie was buried in a private family ceremony in Melbourne on Saturday 22 December 2007. 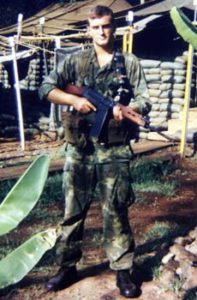 Private David Fisher. Reproduced with the permission of Army News, Department of Defence.

Private David John Elkington Fisher was a young Australian who had volunteered for national service, and had been selected for the Special Air Service Regiment (SASR).

On 27 September 1969, he was a member of an SASR patrol in an area to the west of the Nui May Tao in Long Kanh province, Vietnam. After a number of contacts the patrol requested a ‘hot extraction’. During this extraction Private Fisher fell into thick jungle from a rope that suspended him below the helicopter. Several air and ground searches over of the next week failed to find any trace of Private Fisher. He was officially listed as ‘missing in action presumed dead’.

Unrecovered War Casualties – Army commenced a careful examination of all available Australian records and unit war diaries, and interviewed Australian veterans involved in the incident in which Fisher was lost. They also appealed to the Australian Vietnamese community for help.

Armed with the information gathered in Australia, the team travelled to Vietnam in March 2008 to find information from local sources. What followed was two weeks of interviews with former Viet Cong and North Vietnamese soldiers.

In archived documents, Unrecovered War Casualties – Army discovered a small piece of information that had previously escaped attention. It was a reference to the discovery of a pool of water ‘red in colour’ that was just outside of the original designated search area. The find was considered significant enough at the time for a sample of the water to be given to the 1st Australian Field Hospital for analysis. No record of what happened to the sample was found.

Another key piece of information came from a member of the Australian Vietnamese community. He told investigators that in October of 1969 he and another soldier found the body of a ‘dead American’ (Fisher, like most SASR soldiers, wore US camouflage uniform) and had buried his body in a shallow grave beside the Suoi Sap. He was able to provide a detailed description of the location.

The missing piece in the Fisher puzzle was a more precise indication of where Private Fisher may have landed. Details of the direction and speed of the aircraft and the time of flight before the fall were calculated and applied to a map. It became apparent that earlier searches had concentrated on an area too close to the roping extraction point.

In August 2008, Unrecovered War Casualties – Army returned to Vietnam and began the careful examination of the area bordering the Suoi Sap from its confluence with the Song Ray to the newly plotted area of interest. 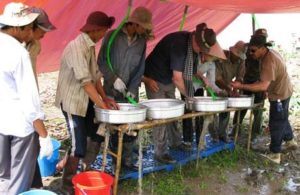 Searching for bone fragments. Reproduced with the permission of Army News, Department of Defence.

While examining a shallow pool of water a Vietnamese team member, close to the Suoi Sap, found a large piece of bone believed to be human. Also found was a piece of plastic from the inside of an Australian-issue collapsible water bladder used by the SASR in Vietnam.

The next day, after examining a photograph of the bone fragment an Australian forensic anthropologist was able to confirm that it was most likely the lower end of a human femur (thigh bone). This was supported by the director of the Military Forensic Institute in Hanoi.

After Vietnamese Army engineers conducted an unexploded ordnance search, work commenced to recover Private Fisher’s remains before the return of the wet season. Following a week of careful excavation more remains were unearthed along with Private Fisher’s dog tags.

Private David John Elkington Fisher was repatriated to Australia by the Army in October 2008.