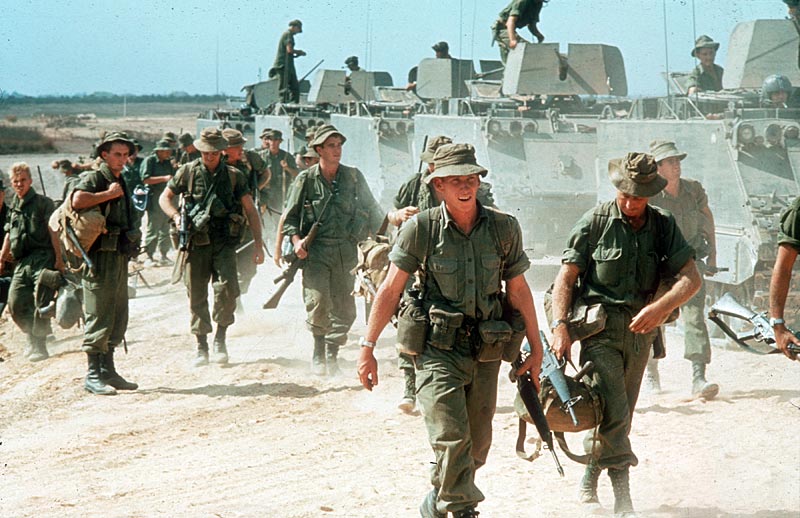 This website contains data relating to the 1 RAR battalion group tour of duty in Vietnam from May 1965 to June 1966. Data relating to 1 RAR’s second tour as part of 1st Australian Task Force, is already contained in the 1ATF data shown on the website.

The data relating to the 1 RAR battalion group has been derived from 1 RAR War Diaries held in the collections of the Australian War Memorial digital records. The data has been extracted from AWM95 Subclass 7/1 – 1 Battalion, Royal Australian Regiment. We have extracted for inclusion in the website, information about those combat incidents that seem most important in explaining the contribution of 1 RAR to the campaign. The 1 RAR War Diaries contain much more information than we have displayed in this website. For example the War Diaries refer to numerous 1 RAR TAOR patrols which result in no contact with the enemy. We have excluded those from this website, but they or other information we have judged to be unimportant, may be important to other research projects. We recommend to researchers that they use our website as a way of accessing the 1 RAR data but that they explore the War Diaries more widely if they are interested in information we may have excluded.

We have made our best effort to capture an accurate picture of the 1 RAR campaign. We would welcome corrections, clarifications or additional information from 1 RAR veterans and we invite 1 RAR veterans and others to use the ‘add notes’ capability to add their stories and upload their images relating to the events depicted on the website.

In the data displayed on the website we have included the following:

We used the 1 RAR War Diaries, plus the more detailed After Action Reports and Installation Reports to add detail.

The After Action Report used by 1 RAR was simpler than the version used later by units of 1 ATF. As a result, there is less data available about 1 RAR first tour operations, and fewer analytical capabilities can be applied to the 1 RAR data.

The 1 RAR After Action Report took the following form:

Summary of action in chronological sequence.

Researchers using the website to examine the 1 RAR battalion group data should note the following:

In the first months of operations, the 1 RAR battalion group War Diary tends to be very detailed (covering the period from May to December 65). However, in 1966, possibly in response to the change in Commanding Officer, or to growing familiarity with operations, the War Diaries became much less detailed. From January 1966 the War Diaries more frequently recorded locations using a codeword or other name (e.g., ‘sector G’ or ‘LZ Queen’). We have managed to track most of these down using topographical maps and have inserted what we believe to be the relevant grid references.

Also, in some cases the War Diaries were rather vague about what had happened. In a small number of cases they merely record that a casualty had been inflicted on a 1 RAR man without any further explanation. We think this may be due to the high frequency of contact in some 1RAR operations. There is one operation in which the War Diary simply states that the battalion was in constant contact throughout the operation. Similarly, in some operations, so many installations were found that we think 1 RAR gave up attempting to record them all.