On 10 September 1969, the 199th US Light Infantry Brigade killed a number of VC in an engagement at YT557333 in southern Long Khánh Province – including the second-in-command of the 1st Battalion 33rd PAVN Regiment named Bùi Đức Nhật. They recovered a 33rd Regiment ‘News Bulletin’ titled ‘Information/Propaganda and Training – Đoàn 84C’ (Đoàn 84C – as with ‘A57’, was a 33rd Regiment cover-name). The ‘News Bulletin’ had been published quite soon after the Battle of Bình Ba from 6 to 8 June 1969, and several articles referred to combat against Australian troops. 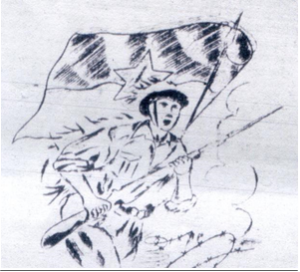 The 33rd PAVN Regiment’s Museum at Bình Ba, its history monographs, and its formal history published in mid-2016[1] all acknowledge the Regiment’s defeat and heavy casualties at the Battle for example, acknowledging that ‘50 soldiers of our 7th Battalion were killed.’

However, in the weeks after the battle, the Regiment’s political cadre published a 14- page News Bulletin extolling their victories in 1969. Several articles referred to combat against Australian troops – for example, claiming to have killed a total of 205 Australian troops to September 1969, and having wiped out two Australian infantry companies – including a mechanised infantry company at the Battle of Bình Ba.

In fact, only one Australian soldier was killed in action at the Battle of Bình Ba – Private Wayne Teeling of 5RAR. Furthermore, based on 1ATF records and the Australian Official History, total Australian losses in engagements with the 33rd Regiment during the War probably numbered only about nine KIA. 5RAR lost one man killed during Operation Hammer (the battle of Binh Ba) (Private Wayne Teeling mentioned above), and 10 WIA while the PAVN/VC lost 99 KIA. In Operation Lavarack (30 May – 30 June 1969) 6RAR/NZ lost three KIA and 29 WIA while the PAVN/VC lost a further 99 KIA. Finally, in Operation Ivanhoe from 19 September to 2 October 1971, 3RAR and 4RAR/NZ lost 5 KIA and 30 WIA while the PAVN/VC lost 15 KIA. Some of these Australian casualties may have been inflicted by PAVN/VC elements other than the 33rd PAVN Regiment.[2]

An account of the exploits of a 33rd Regiment ‘model rifleman’ – Private Hoàn, specifically claimed that at the Battle of Bình Ba, the 33rd Regiment destroyed 22 armoured vehicles and killed 90 enemy.

The News Bulletin also included a ‘soldier’s derisive poem’ recounting the 33rd Regiment’s ‘victory’ at the Battle of Bình Ba – see below. The poem was titled: ‘The rats’3[3] tails of the fleeing Australians exposed!’ (i.e., a Vietnamese expression also meaning something like – ‘Australian deficiencies and evilness revealed’).

The news has spread far and wide,

Some Australian soldiers have left their homes and come here,

Where there are rivers and streams, swamps and marshes,

High mountains, and low hills – all obstacles to them,

They crept and groped everywhere seeking our sanctuaries,

Their soldiers painted their faces and ambushed our tracks.

In the fires, the people’s houses were set aflame,

The fleeing Australians showed their true rats’ tails, and we laughed derisively,

Let’s tell the story from beginning to end,

In Long Đất District4[4] everyone knew,

It was just the Australians that had to take the bitter pill,

In this time of death they fled seeking rescue,

This time the Australians met with the “VC”,

They felt heavy as if their limbs weighed a thousand kilos,

The “Royal” troops even took off their trousers,

Threw down their guns, cast away their ammunition, and fled afar,

Their deafening screams gave us headaches,

We ask whether the Australians have any capability remaining,

Is it true that they’ve eaten too much candy,

The ghosts of the Australian soldiers fear the mountains and rivers of our land,

The people of Long Đất are very appreciative,

The soldiers of 33rd Regiment would have been aware of their heavy losses – and such morale-boosting hyperbole as included in the Bulletin was routinely disseminated by their political officers. During the Vietnam War, over 3,000 of the 33rd Regiment’s soldiers were recorded by the Regiment as killed or missing – with the Regiment’s average strength being only about 1,300. Following the ‘fall of the South’ in 1975, the Regiment also fought the Khmer Rouge in the ‘South-West Border War’ and later within Cambodia from 1978. The Regiment was deployed back to ‘North Vietnam’ in December 1979 – i.e., following the early 1979 Chinese ‘incursion’ into Vietnam (however the Regiment was not involved in any combat operations against the Chinese forces).

[1] Published in April 2017 by Ernie Chamberlain in English with a critical commentary and several amplifying annexes including 1 ATF signals intelligence (SIGINT) aspects – free-to-read on the Internet at: https://www.scribd.com/document/346613212/The-33rd-Regiment-North-Vietnamese-Army-Their-History- 1965-1989-including-the-Battles-of-Binh-Ba-1969-and-Nui-Le-1971

[3] According to a 1968 article in the Australian Army Journal, ‘the term ‘Red Rats’ was affectionately bestowed on the 1st Australian Task Force in Phuoc Tuy Province by the South Vietnamese peasants. Its derivation stems from the red kangaroo which was initially painted on all the Task Force vehicles. As the Vietnamese had never seen a kangaroo, and as there was therefore no comparable word for it in their language, they inevitably called it ‘the red rat’.’ Hutchinson, I. Captain (former GSO3 Ops, HQ 1 ATF), ‘The ‘Red Rats’ and Phuoc Tuy’, Australian Army Journal, No.227, April 1968, p.3. The Sino-Vietnamese word for ‘kangaroo’ was con đại thử – literally: ‘great rat’; and this also contributed to the belief that the Australian Army symbol was a red rat.

[4] The poet is mistaken. The Battle of Bình Ba took place in VC Châu Đức District – not Long Đất District.

The red kangaroo symbol was painted on many Australian military vehicles in Vietnam – and also on road signs and unit signs. The red kangaroo – in the style as depicted on the Australian penny, had also appeared on RAAF aircraft roundels from 1956.