No 2 Squadron, Royal Australian Air Force, deployed from Butterworth, Malaysia to Phan Rang air base, 35 kilometres south of Cam Ranh Bay, a large USAF base in the far east of South Vietnam, on 19 April 1967. 2 Squadron ‘Magpies’ were part of the 35th Tactical Fighter Wing and were tasked by HQ 7th Air Force in Saigon, for eight sorties per day for seven days a week, in all areas of South Vietnam from 23 April 1967 until return to Australia in 1971. The Americans referred to the Canberra bombers as B57’s.

The Canberra filled a gap in the USAF inventory as it was the only tactical aircraft in South Vietnam which bombed, visually, from straight and level flight, albeit at 350knots. Often, the Canberra could fly below the cloud while the dive attack aircraft could not see the ground to acquire the target because of the low cloud base. The USN and USMC operated the A6 Intruder in all-weather attack modes, usually straight and level, using radar bombing systems. USAF F111As operated in similar modes in 1968, undergoing combat evaluation, but were withdrawn after three were lost. The F111s returned in 1972 and achieved outstanding results.

For the first few months, the Squadron carried out night Combat Skyspot missions where aircraft were guided on the bombing run by ground based precision radar. The first low level day missions started in September 1967, with forward air controllers marking the targets with smoke. Most sorties were in support of the Australian Task Force in the IV Corps area. Flying at about 3000 feet (915 metres) above ground level (AGL) to avoid ground fire, the crews achieved accuracies of about 45 metres. On a number of occasions, aircraft released their bombs from as low as 800 ft (245 metres), followed by a rapid pull-up to a height outside the fragmentation envelope. However, a number of aircraft were damaged by bomb fragments (shrapnel) and some navigators suffered minor injuries as a result.

HQ Seventh Air Force was impressed with the bombing accuracies of the Australian Canberra bombers when operating with FACs in close support of ground troops and by November 1967, were being tasked with four day low level sorties. However, greater accuracy was necessary to achieve the required damage levels on the targets being attacked. Bombing accuracies were improved to 20 metres CEP.

The Canberra achieved the transition over many years from a high level bomber with poor accuracy to a very accurate low level tactical bomber in support of ground troops. Most of the day low level operations in Vietnam were in IV Corps where the low and flat terrain resulted in the Canberra achieving very good bombing accuracy.

Flying about 5% of the Wing’s sorties, 2 Squadron was credited with 16% of the bomb damage assessment. 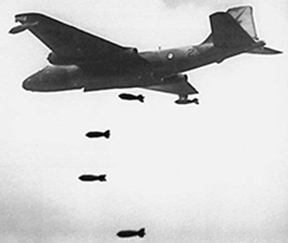 Initially, bombs released were ex-WW2 war stocks. Typical aircraft loads varied from 10 x 500lb bombs to 6 x 1000 lb bombs. All the war stocks were exhausted In 15 months and 2 Squadron changed over to the USAF M117 bombs; 4 in the bomb bay and two on the wing tips. More reliable fuses in these bombs resulted in few of the problems experienced with the earlier British designed bombs.

North Vietnamese troops unleashed a heavy mortar, artillery and rocket attack on the Marine base at Khe Sanh on 21 January 1968, before the Tet offensive. Khe Sanh was an important strategic post and its capture would give the North Vietnamese an almost unobstructed invasion route in the northernmost provinces, from where they could outflank American positions south of the Demilitarised Zone (DMZ).

Operation Niagara was launched to defend Khe Sanh. On the first day of the attack, nearly 600 tactical sorties (including 49 by the B 52’s) were launched against enemy positions.

2 Squadron Canberra bombers were involved in day and night operations, usually in pairs, and carried out visual bombing (daylight) and Skyspot missions in support of the siege. The most dangerous missions to the Khe Sanh area were flown at night when aircraft were often held in racetrack holding patterns at 20- 25 000 ft with numerous (up to 30 or 40) USAF, USN and Marine Corps aircraft.

2 Squadron operations continued in all Military Regions (MR), including the DMZ, the Cambodian/Laos border, the A Shau Valley and Khe Sanh from 1969 to 1970. In all operations, the Canberra bombers achieved excellent bombing results.

On 3 November 1970, the first Canberra (A84-231) was lost during a Skyspot mission in the Danang area. The aircraft was not found until February 2009 – see the article on Magpie 91. The cause of the loss has not been determined.

Another aircraft, A84-228, was lost in March 1971 in the Khe Sanh area. The crew, WGDCR John Downing and FLTLT Al Pinches, ejected and following their rescue the next day by a ‘dustoff’ UH-1H rescue chopper, confirmed they had been hit by a SA-2 missile, which blew the right wing off. 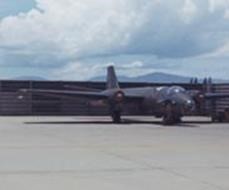 The last Canberra mission in Vietnam was 31 May 1971 and was tasked in support of the US 101st Airborne Division in the A Shau Valley, an area frequented by the squadron many times over the last two years. 2 Squadron released a total of 76389 bombs in its time in Vietnam.

The squadron departed Phan Rang on 4 June 1971, arriving back in Amberley on 5 June, 13 years since it deployed to Malaya in 1958.

No 2 Squadron air and ground crews performed exceptionally well in the air war in South Vietnam and carried on the fine traditions of strike squadrons in the RAAF.