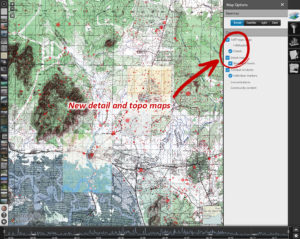 Access the new topo and detail maps using the Layers panel (as shown). Zoom in to see finer detail.

We’re excited to report that the Australia’s Vietnam War Battle Map has been updated. 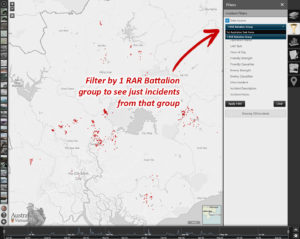 The new 1 RAR data is shown automatically on the map. You can view just the new data by using the new filter (as shown).

The casualty honour roll displays a portrait against each soldier and provides biographical information. This data was sourced from the Department of Veterans’ Affairs (DVA). We are still in the process of mapping casualties to individual contacts and currently, only some of the 521 casualties have been associated with incidents on the map.

Do you know the exact contact where a soldier was killed in action, or later died of wounds? If so, you can help us by:

We’ve so far mapped about 150 out of 521. Once completed, the website will better serve families of veterans in particular, by providing context surrounding the death of our fallen soldiers. 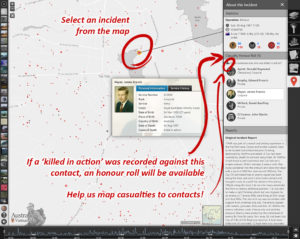 The Casualty Honour Roll is shown where at least one ‘killed in action’ was reported against an incident. If the right people are not shown, help us by providing more info!