In the afternoon of 27 November 1967, 12 Platoon, D Company, 7RAR engaged about 30 Việt Cộng near an unoccupied base camp at YS 336708 – about 10 kilometres north-east of 1 ATF’s Núi Đất base, during Operation Forrest. Casualties in the engagement were reported as one Australian killed and 17 wounded, and three Việt Cộng killed (by body count) – probably VC Châu Đức District elements.[1]

VC documents recovered by D Company, 7RAR after the engagement included a “Việt Cộng Intelligence Report” – probably prepared by an element of the VC Bà Biên Province Headquarters or – more likely, the Châu Đức District Headquarters, that detailed ARVN and Territorial Force elements, US, and Australian forces in Phước Tuy Province. The Australians were referred to as “chư hầu” – ie “vassals” or “satellites” of the US. The report – in a columned broadsheet A-3 format, was undated and unsigned, but appeared to have been prepared in early-mid 1967 as it refers to Australian troops at Dốc Hamlet, Đất Đỏ – ie termed the “The Horseshoe” by Australian forces.[2]

In summary, the VC Intelligence Report detailed the “enemy” strength in Phước Tuy as totaling 4,985 personnel – including “1,500 Australians at the Núi Đất strong-point”, “220 Australians at the airfield in the Nhà Sở Plantation” (ie Bình Ba village), and “600 Australians at the Dốc Hamlet, Đất Đỏ (ie The Horseshoe) – a total of 2,320 Australians.[3] The “enemy equipment” list in the Report included six 155mm artillery pieces, sixteen 105mm howitzers, and 38 M113 APCs.

The VC Intelligence Report on “the enemy” is incomplete. It does not include significant locations of ARVN forces eg in Bà Rịa Town (Phước Lễ ): the ARVN Sector Headquarters, the A & L Company, the Provincial Reconnaissance Unit; the Vạn Kiếp National Training Centre on Bà Rịa Town’s eastern outskirts; other centres such as Đất Đỏ Town, Long Điền Town, Xuyên Mộc District, Long Hải (ARVN training centres), the various Territorial force elements, nor the Government military outposts on Routes 23 and 44.

Much of the copy of the Intelligence Report – as produced by the US/RVNAF Combined Document Exploitation Center (Saigon)[4], is illegible (see the image below). However, the following information can be discerned from it:

Tabulated Broadsheet (as four A-4 sheets): 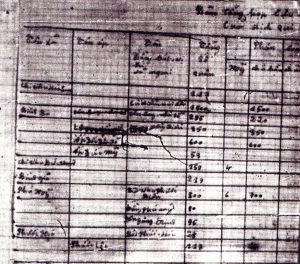 Reverse of the A-3 Broadsheet – Summary Recapitulation

[5] In early 1962, the Saigon Government established the headquarters of the Phước Biên Special Zone/Sector in a base beside Route 15 at YS 239773 – two kilometres north of Phú Mỹ village to control security across Biên Hòa, Long Khánh and Phước Tuy Provinces. The airstrip at Phước Biên was initially constructed by Australian PWs during WWII – an air photo of the Phước Biên/Phú Mỹ base and airfield was emailed to Major General (Retd) M.P.J. O’Brien, 1 Dec 2020.

[7] This recapitulation/summary was written on the reverse of the A-3 broadsheet. It has transcription errors ie incorrectly showing ARVN Main Force as “Vassals” – see the following footnotes 8 and 9. CDEC analysts suggested that these summary figures – ie on the “reverse” of the broadsheet, were prepared in the third quarter of 1966. However, it is more likely that the broadsheet and the summary were prepared sometime after March 1967 as both documents include Australian troop (“600”) at Dốc Village – Đất Đỏ (“The Horseshoe”) see the preceding footnote 2).