In late September 1971 I was a 23 year-old rifle platoon commander in Delta Company of the 4th Battalion, the Royal Australian Regiment. We were on operations in the north of Phuoc Tuy Province searching for and hoping to destroy our enemy; the highly trained, strictly disciplined and deeply motivated soldiers from the North Vietnamese Army’s 33rd Regiment. These guys were no pushovers and as we had found out earlier in the month, if they thought they had a chance of winning a firefight they would hang around and have a crack. By late afternoon on 21 September, my platoon was part of a formal company attack into a heavily defended bunker system. This meant that the bad guys had the advantage of being able to fight from heavily camouflaged fighting positions that were difficult to detect and lethal if we moved into their interlocking arcs of fire. 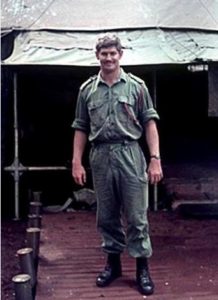 After only 30 minutes of close quarter fighting my platoon was in serious strife. Two of my three machine gun crews – the firepower of the rifle sections – had been shot to death and the third machine gun group was not able to bring fire to bear on the enemy. What was also disconcerting was that we were heavily outnumbered, probably about five to one. The intensity of the fighting was mind shattering. Once battle had been joined, and here we are talking about an engagement distance (the distance between the opposing forces) of about the length of a cricket pitch or, at most, 25 metres. The noise was unlike anything we had encountered in our previous six months in South Viet Nam. It was so deafening I was unable to shout orders to my section commanders only ten metres away. By the end of the day we were forced to withdraw from the enemy position, and I was compelled to leave three of my dead soldiers on the battlefield because trying to recover their bullet torn bodies would have only resulted in more casualties. My platoon sergeant and second-in-command was also a casualty and had been evacuated from the battlefield. My platoon as part of our 100-strong company, now withdrew from the assault and reorganised about 500 metres south. But by last light we were back in heavy contact and surrounded on three sides by large numbers of seemingly very angry enemy.

It was during this next firefight that I was shooting at a soldier who was firing at me every time I tried to yell orders to my men to consolidate our defences.

I heard a huge bang and thought it was a rocket propelled grenade hitting the tree I was using for cover from fire (which clearly didn’t work). The ‘bang’ I heard had in fact been the shock wave of being hit by several bullets. Eventually the enemy soldier hunting me out had got me and when the two bullets slammed into my shoulder the impact pushed me back along the ground about 150 millimetres or roughly six inches. People ask, ‘So, what’s it like to be shot?’ I usually answer along the lines that it is like laying on the ground and somebody coming up with a steel-tipped boot and laying into you with an almighty kick. Sticking the slipper in as some would say.

After Mick, the platoon medic, dragged me back from the perimeter and started looking at my wounds in failing light did we realise that I had one bullet resting under my left nipple and the other round had skipped off my shoulder blade and torn a long ugly gash in my back. Worse was that I was now slowly bleeding to death and my left shoulder joint was not only dislocated but shattered. Thanks to the medic, I survived the night and was pulled out of the jungle on a winch by the RAAF the next morning at about 9 a.m. It had been a long night. I had decided that if I fell asleep I would probably never wake up, so I stayed conscious the whole night, sitting up with Mick pressing wound dressings into the gaping hole in my back to stem the blood flow.

I was unceremoniously dragged inside the hovering chopper by the crew chief and he set about administering a drip to rehydrate me. We then flew back to the Australian Field Hospital at Vung Tau and to the appropriately named Vampire Pad where the Dustoff helicopters brought the wounded. I told the waiting medics I would be okay to walk into triage being the tough bronzed Anzac that I thought I was… only to have my legs fold under me as soon as my feet touched the pad. Like alert slip fieldsmen they grabbed me and carefully cradled me onto a stretcher. They carried my very tired body into the reception and triage area.

I was now on the concrete floor in the hospital still on the stretcher. I was asked a myriad of questions about pain, what drugs I had been given like morphine and so on. I had been given nothing because we had used all of the morphine on one of my men who had later died on a chopper on his way to the hospital. A male nurse came along and using a very large pair of scissors cut off my Army green trousers and boots. I had no shirt because that had been ripped up the back when Mick the medic was trying to find why I was bleeding so much.

I looked down towards my groin and was horrified to see that I turned into a hermaphrodite overnight because my penis seemed to be missing. I think it had crawled up inside my body out of sheer fright the day before. As I lay there I started to feel extreme tiredness washing over me. It was probably because the day before our battle had started at 9 am and had gone on for about 12 hours non-stop. It was a physically and emotionally draining day.

I had gone from the horrendously loud din of battle, where explosions were renting the air every quarter minute or so. Artillery was smashing into trees to our direct front. Napalm had been dropped only 75 metres from our forward position. I had been constantly firing my personal weapon and at one stage a machine gun I had recovered from my dead gun crew. I was also throwing hand grenades at enemy soldiers only 15 metres away. I had shot and killed enemy soldiers whose young faces I could see quite clearly as my bullets slammed into their bodies. They fell bum first onto the ground much like a puppeteer’s marionettes whose strings have been severed. It had been a brutal, uncompromising and savage day of fighting in the hot, fetid jungle. Much of the day had been spent crawling around on our guts on the jungle floor moving from one firing position to another to avoid being pinned down by overwhelming enemy fire.

Now, I was laying prone on the floor a spectacularly clean hospital with people who had showered that morning, male nurses in ironed greens and nursing sisters in their crisp starched grey uniforms looking all the world like Florence Nightingale or angels or both. It was surreal, almost feeling like another world, a sanctuary from the madness of killing.

After surgery to clean up my wounds and remove bone fragments from my shattered humerus and clavicle I was soon in the recovery ward. I had joined 23 other soldiers from the battalion that had been wounded that day. We had lost five killed with three yet to be recovered. I wasn’t feeling too flash and while being shot is not without pain, the agony I was now experiencing was another world of hurt altogether. I accused the surgeon of malpractice and asked if he was a Communist because of this incredible pain I was now suffering. He explained that delving deep into my body to remove a bullet and taking out shattered bone was never going to be without some digging around and explorative surgery. I still thought he was a Communist.

Pain? I had busted my ankle playing footy, and broke my arm in a car prang but this was different. When I was asked ‘How would you rate your pain on a scale of 1 to 10?’ I answered 50 but that didn’t seem to interest the nurse standing patiently by my bed with a tray of needles. I decided to put a colour code to the level of agony. Red was tolerable, yellow was ‘shit, this hurts’ and white was ‘where is that nurse with the morphia needles?’ I had seen blokes in hospital prior to me going to Viet Nam who had become addicted to their pain killers and I was not wanting to go down that track, so I would hang out for as long as possible before asking for relief. It came slowly and when I was in the white hot world of pain and started to get twitchy I would seek relief. It became a personal game between my mind and my body and I tried to extend the periods between shots to try and live with the searing pain.

After a couple of days in bed I was starting to feel a little better and then my world was shattered. I was looking out of the window in the ward when a chopper landed and the bodies of my three dead soldiers who had finally been recovered were wheeled into the hospital morgue on gurneys. A wave of guilt washed over me and it felt like mud and not water. I was consumed by an intense feeling that I had let my men down, that I had not done enough, or had made a bad error of judgement. I was in a bad place. It must have shown because a fellow platoon commander from another company who had also been wounded, came up to me and asked what was wrong. I started to speak but started crying instead. I felt his arm on my good shoulder and he moved very close to my ear so the soldiers in the ward wouldn’t hear what he was saying. ‘Mate, you couldn’t have done any more than you did. You were outnumbered, outgunned and regardless of what you did, shits were always going to be trumps.’ I nodded and closed my eyes to hide my tears. He was right of course, but the feeling of guilt was enormous. The guilt of command some have called it, and it has been around since people began throwing spears at each other and nothing now was any different. I was their commander and my job was to kill the enemy but not at the expense of our own soldiers. 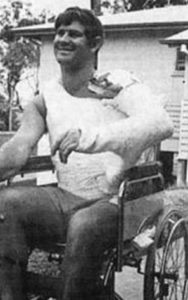 Gary McKay recovering from his wounds at Yeronga, Brisbane.

I was too badly wounded to stay in Viet Nam so I was sent back to Australia for further repairs. In all, I would spend almost a year in hospital having two more operations and hours of physio in the torture hut at the hospital in Yeronga in Brisbane. Was it worth it? Who knows? One thing is for sure though, there are no winners in a war: every side loses something. 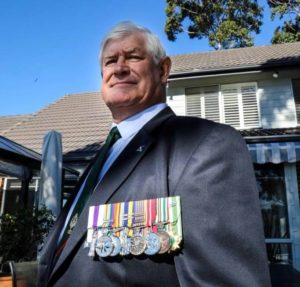