From March 1970 until November 1970 I was in charge of one air and two ground  teams at 1st Psychological Operations Unit in Nui Dat. One night there was an urgent request for a ground team with their loudspeaker capabilities, to report to 1st Australian Reinforcement Unit (1 ARU) within Nui Dat.

On arrival at 1 ARU I was quickly briefed about an emergency that had arisen. It had begun with a well-known practical joke practiced on soldiers newly arrived from Australia on their first tour. The ‘joke’ invited them to get ready to go to the local Hoa Long dance held each Saturday night.

Hoa Long was a village just to the south west of the Nui Dat base.  It was made up of local villagers and, since the arrival of the Australian Task Force and the destruction of the outlying villages of Long Tan and Long Phuoc, supplemented by the people displaced from those two villages. Most of the population of Hoa Long village was known to be strongly pro-Viet Cong and part of the joke was that the village was the last place Australian soldiers would want to go for a dance. 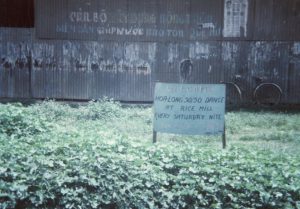 A sign, inside Hoa Long, advertising the Saturday night dances.

New arrivals were told that if they put their names on a list in the 1 ARU Other Ranks boozer, they would be approved to go to the dance on Saturday night. Young fresh-faced soldiers from Australia thought they were going to enjoy these Asian delights. Saturday night came and the new soldiers were lined up in their best polyester uniforms where they were inspected by a Corporal and put on the back of an open truck. The people who organised this ‘going to the dance’ joke had also organised the Military Police who guarded the front gate exit from Nui Dat, known as the ‘Pearly Gates’, to expect the truck and prevent it from leaving the base. The driver was ‘in’ on the joke. As dusk fell, the Military Police stopped the truck and inspected all those on board. They then gave them the bad news that ‘the road has been mined and no one can leave Nui Dat until morning when the engineers would have cleared the road’. The vehicle was turned around and sent back to 1 ARU with its load of disappointed dance-goers.

On arrival back at the 1 ARU soldiers’ ‘boozer’ the dance-goers were duly heckled by those marginally more experienced soldiers in the bar. That should have been the end of it, but the joke didn’t stop there. The disappointed dance-goers settled down to drink in the boozer. A few of them, looking at maps on the boozer wall, saw that Hoa Long  was only about 3 to 5 kilometres to the south of their unit perimeter. 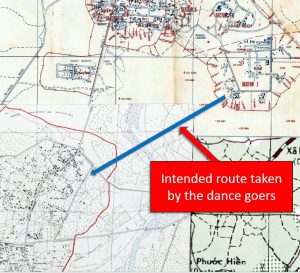 They thought that the grilling they received when they came back to the unit from the MP’s at the Pearly Gates was ridicule because they were unable to travel on the road.

After a few drinks and looking at the maps on the wall at the boozer, a few determined dance-goers conjured up a simple plan. They would exit through the perimeter fence, walk to the village, find the dance and have a good time. Simple. They snuck out of the base and headed towards the village. Luckily, their departure was noticed by a nearby perimeter machine gun piquet who reported it to the 1 ARU base defence command post. They called out to the dance goers who had departed the base, but had no response. 1 ARU then called the Task Force Headquarters which alerted me to the problem. That’s when my Psyops team, callsign Litterbug 11, was called to assist. The team consisted of my driver, a rifleman guard and myself in our loudspeaker equipped Landrover.  I did not require my Vietnamese interpreter.

We drove our broadcast vehicle up to the perimeter fence at 1 ARU and faced it towards Hoa Long. For the next hour we broadcast a message to the dance goers hoping they could hear our warning. Our warning was simple:

Don’t move! Find some thick bush (most had been cleared around the base to improve fire lanes) and hide in it until morning. In the area you are in, there are three set ambushes. Stay where you are until a patrol comes and gets you in the morning.

I was worried that the dance-goers may not have heard our loudspeaker warning. I went back to the Task Force Headquarters and ordered a helicopter with loudspeakers attached to it. We took off at first light and flew the area between the village and the perimeter of the camp. We told the dance-goers to stay where they were until we called them out of their hiding place. The ambush patrols had been contacted by radio and told that there were unarmed Australians dressed in polyester uniforms, and without weapons, in their areas, and they were not to shoot them.

The dance going soldiers were identified and were found to be within 300 metres of an ambush position. The ambush patrol was despatched to them and escorted them back to 1 ARU.

The moral of the story is that whenever pulling a joke on someone, make sure they come to no harm. Jokes like this can build cohesion, but can also be taken too far. It was lucky that a number of new soldiers were not killed that night as a result of a prank gone horribly wrong.