Throughout the course of the Vietnam War, Gallup Polls were regularly conducted in the United States. Beginning in 1965 the polls asked a standard question:

In view of the developments since we entered the fighting in Vietnam, do you think the US made a mistake sending troops to fight in Vietnam?[1] 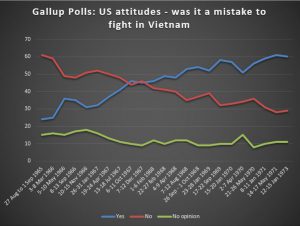 The graph above shows that the attitudes of US citizens towards the fighting in Vietnam underwent a steady transformation throughout the course of the war. Initially, US citizens strongly supported the idea that it was not a mistake to fight in Vietnam. However, as the war continued and US military power was unable to achieve decisive victory, citizens increasingly came to see the fighting as a mistake. 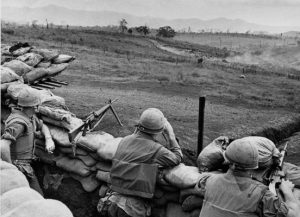 US troops on the Khe Sanh defensive perimeter.

The point at which the ‘yes’ and ‘no’ lines cross is around October 1967, shortly after the Republic of Vietnam (South Vietnam) held its first Presidential election under its new democratic constitution passed into law in April 1967. It is also that period immediately prior to the shock of the Tet Offensive which began in late January 1968. The initial attacks of the Tet Offensive of 1968 shocked Americans despite HQ USMACV knowing that an offensive of some sort was coming. The attack on the US embassy in Saigon, and the battles in Saigon, Hue and at Khe Sanh which dragged on into February and in the case of Khe Sanh into mid-1968, added to this sense of gloom. From this point, the Democratic Republic of Vietnam (North Vietnam) increasingly targeted American domestic opinion in its efforts to achieve victory in Vietnam.