Following the Second World War, elements of the Australian Defence Forces were deployed on the British Commonwealth Occupation Force in Japan, the Korean War, the Malayan Emergency and on Confrontation. In the early 1960s, public attention was drawn to the possibility that Australian forces may again be deployed on combat operations, this time in Vietnam. The following graph shows how Gallup Polls recorded Australian citizens’ fluctuating support for deployment of forces to Vietnam. The graph shows that support for the deployments (the blue line) rarely fell below 50% and except in 1970 when withdrawal of Australian and US forces was well underway, was always stronger than opposition to deployment (the orange line).

The numbers (1 to 5, in red) on the graph, relate to the notes below. The notes describe in more detail the responses to the Gallup Poll questions and the factors that may have influenced those responses. 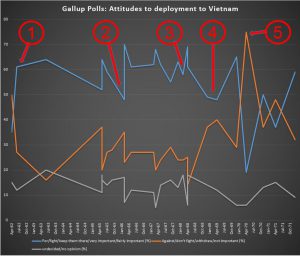 In April 1962, before Australia had deployed any forces to Vietnam, a Gallup Poll asked Australians ‘if America goes to war against the Communists in South-East Asia, to defend Thailand, do you think Australia should also fight there, or keep out of it?’ Of those sampled, 35% said ‘fight there’, 50% said ‘keep out’ and 15% were undecided.[1]

Despite the apparently strong rejection of committing troops to Southeast Asia in the April 1962 Gallup Poll, the Australian government announced the decision to raise and deploy the Australian Army Training Team (AATTV), initially consisting of just 30 men, on 24 May 1962. Shortly after that announcement, in June 1962, a cross section of 2000 men and women were interviewed following the Government’s sending of ‘token forces’ (the AATTV) to Thailand and Vietnam to support American forces there. The interviewers asked ‘do you approve, or disapprove, sending those token forces to Thailand and Vietnam?’ Of the sample, 61% approved, 27% disapproved and 12% were undecided. The ‘approve’ vote came from 65% of men and 57% of women. It also came from 70% of Liberal – Country Party (L-CP) voters and 56% of Australian Labor Party (ALP) voters.[2]

The response of those interviewed stood in stark contrast to the response to the similar question asked only one month earlier. The response to the June 1962 Gallup Poll may have reflected public relief that a larger and combat oriented force had not been sent.

In June 1965 the 1RAR Battalion Group deployed to Vietnam and was placed under command of the US 173rd Airborne Brigade at Bien Hoa Air Base. There was discussion in the media about the expansion of Australia’s commitment to the campaign and in March 1966 the government announced that the Australian commitment would be expanded to a two-battalion Task Force. 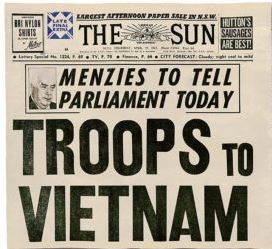 It is often thought that young Australians were more opposed to the war in Vietnam and that older Australians tended to more strongly support it. However this polling result shows otherwise. 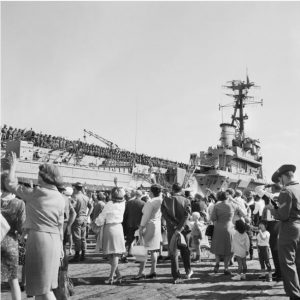 The second poll was targeted specifically at a younger age group including those who might be liable for call-up as National Servicemen in the near future. The Australian government had introduced the National Service Scheme in November 1964 in which selected 20-year-olds could be called up for two years’ service, including possible deployment to Vietnam. In this second February poll 1600 ‘boys and girls’ aged 15-20 were asked ‘Do you think we should continue to fight in Vietnam, or should we bring our forces back to Australia?’ Of those polled, 70% said ‘continue’, 23% said ‘bring them home’ and 7% were undecided. Of those favouring continuing, 74% were ‘boys’ and 67% were ‘girls’. 82% of L-CP supporters and 62% of ALP supporters favoured continuing.[4]

Once again, this poll showed that young Australians, including those most liable to be called up for service in the National Service Scheme, tended to favour continuing the war.

The US Presidential election campaign of 1968 resulted in the election of Richard Nixon. Throughout the campaign, and after his inauguration in January 1969, Nixon had asserted that he would end the war in Vietnam. With his ascent to power there was much discussion in the media about a possible US de-escalation and ending the war. This discussion may have contributed to Australia’s changing attitude towards continuing the war.

In June 1969, Richard Nixon announced that the US would begin unilateral withdrawals of its forces from Vietnam. For the remainder of 1969 and into early 1970 the US Army withdrew over 59,000 troops from Vietnam. As US withdrawals progressed there was some discussion in Australia about whether Australian forces should also be withdrawn, and if so, whether they should be withdrawn completely, or in tranches similar to the way the US forces were conducting their withdrawal. However, whichever method of withdrawal was adopted, it was clear that the war was coming to an end for US and Australian forces. In these circumstances, the attitudes of Australians towards continuing the campaign changed dramatically and most Australians expressed the view that the troops should be brought home.

In April 1970, 1762 people were asked ‘which do you favour for Vietnam: bring all our forces back to Australia now, or bring them back in stages, or keep the same number in Vietnam until the end of the war?’ Of the sample, 19% said ‘keep them there until the end’, 75% said either ‘bring them back in stages’ (50%) or ‘bring them all back now’ (25%). 6% were undecided. Although the Gallup Poll documents says that the government’s decision to withdraw only part of Australia’s force in Vietnam was supported by three out of four electors, this conclusion does not seem to be supported by the results. Only 50% agreed that the forces should be brought back in stages (ie, in parts). 19% wanted to keep the forces there until the end and 25% wanted them all withdrawn now. 69% did not favour immediate withdrawal. Men and women as separate groups, gave similar answers. 82% of L-CP voters and 57% of ALP voters opposed immediate total withdrawal. Younger people were most opposed to complete withdrawal now. Only 20% of those aged 21-29 said ‘all back now’, compared with 25% of those aged 30-49 and 28% of those aged 50-69.[7]

[4] AGP 1884-1899, Feb-Apr 66. The Gallup Poll uses the term ‘boys and girls’ to describe an age cohort that includes young people of 19 or 20 years. Young soldiers of the Australian Regular Army aged 19 could be deployed to Vietnam. It seems likely that few young men and women aged 19 or 20 would have regarded themselves as ‘boys and girls’.