In May 1964 the Australian government introduced the National Service Scheme. Under the scheme, young men were selected by ballot for two years compulsory military service which could include service overseas in a war zone. National servicemen first deployed to Vietnam as part of the 1st Australian Task Force in May-June 1966. The 1RAR Battalion Group, which had deployed to Vietnam in mid-1965, and the AATTV which had begun service in Vietnam in 1962, were both comprised of members of the Australian Regular Army only.

The graph below, shows support for Conscription (the blue line) compared to opposition to it (the orange line). The white line shows those who were undecided about the issues polled. The numbers (1 to 5, in red) refer to particular points of interest on the graph and refer to the same numbered note in the text below.

Support for the National Service Scheme never fell below 50% for the entire war. Its lowest point was in late 1971 on the eve of withdrawal of all Australian forces from Vietnam. 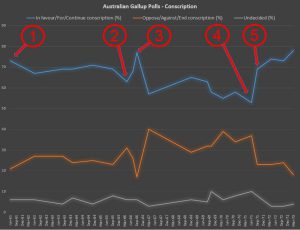 Three years before the introduction of the National Service Scheme a June 1961 poll asked ‘would you favour, or oppose, again having compulsory military training?’ Of those polled, 73% said that they were in favour, 21% said they opposed, and 6% were undecided. The idea was favoured by 71% of men and 74% of women. Young people aged 20-29 – those most liable for call-up under a National Service scheme – favoured it (73%), a similar level of support from people aged 50-59 (74%).[1]

In September 1966, shortly after the battle of Long Tan on 18 August in which 11 of the 18 soldiers killed in action were National Servicemen, a Gallup Poll was conducted. A sample of 2082 electors was told it had been suggested that all young men of 20 should be called up for two years’ national service – some of them in the armed forces, others on development projects. People were then asked if they favoured, or opposed, that suggestion. Of those polled, 77% favoured the proposal, 17% opposed it and 6% were undecided. Of those who favoured the idea, 13% spontaneously gave qualified answers, such as; not for overseas service (7%), two years is too long (4%), not for development projects (1%), not for 20-year-olds (1%). Two years service for all young men was favoured by 81% of L-CP voters, 79% of DLP voters and 74% of ALP voters.[3]

The 11 National Servicemen killed during the battle of Long Tan brought the total number of National Servicemen killed in Vietnam to that point, to 17. Despite this rising toll, Australians seemed mostly satisfied with the prospect that young men should be compelled to serve although they were less convinced that they should be compelled to serve in an overseas war zone.

In June 1971, People were reminded that of all young men aged 20, 1-in-12, selected by ballot, is called up each year for 2 years’ military training, with possible overseas service. They were then asked ‘in your opinion, should that call-up be ended, or continued?’. Of those polled, 53% said it should be continued, 37% said it should be ended and 10% were undecided. Men and women, as separate groups, gave almost the same answers. L-CP and DLP voters were 2 to 1 in favour of compulsory military training. ALP voters were evenly divided about it. Support for continuing the call-up came from 61% of those over 70, 56% of those 50-69, and 54% of those 30-49, but from only 50% of those 21-20 and 49% of those 16-20. Comments by those in favour and by those against, included ‘all should be called up’, and ‘the ballot is unfair’.[4]