When combat elements of 1ATF were deployed on operations it was essential that the Nui Dat base remained secure. Headquarters 1ATF Standing Operating Procedures set out the requirements for base defence. Under routine circumstances, the Nui Dat base used what was termed ‘unit defence’. This required that each unit within the base was responsible for the security of its own area.[1]

At its peak strength, 1ATF included three infantry battalions. Between them, the infantry battalions were responsible for about two thirds of the base perimeter. The remaining third was the responsibility of other units including Artillery, Engineers, Armour and SAS. When the infantry battalions were deployed on operations, each rifle company had to retain enough personnel within the company area to secure the company section of the base perimeter. The numbers were generally made up of two parts – those that didn’t usually deploy on operations anyway (such as the Company Quartermaster Sergeant (CQMS), the storeman, company clerks, cooks, some medical personnel) and an element created by withdrawing personnel from the Company Headquarters and platoons. This second element usually consisted of anyone who was recovering from light injury or illness, those slated to attend a course, and others. Usually about 6 or 7 men per platoon were ‘left out of battle’ (LOB) (ie, left back in Nui Dat). Normal battalion strength was 800 men, but of that number about 210 were required to continue base operations and for base defence.[2] This left about 590 men for deployment on operations. At the platoon level, this base defence requirement and other drains on manpower such as men recovering from wounds in hospital or those undergoing a period of detention, left platoons – with a nominal strength of 33 men – at an operational strength of about 24 or 25. Those LOB for base defence would be under command of the CQMS, Company Sergeant Major or Company second in command – whichever was back in camp. Naturally, with relatively few people in the company lines in Nui Dat and usually three machine-gun bunkers to man on a 24-hour basis, those who were LOB did a lot of sentry duty and local security patrols outside the Nui Dat perimeter wire. 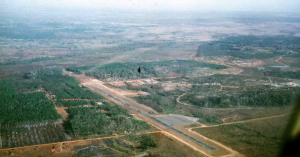 If intelligence warned the Deputy Commander 1ATF (who was the man responsible for the defence of Nui Dat) that the base was under increased threat, then the security was changed to ‘sector defence’ (from ‘unit defence’). The base was divided into ‘sectors’ on the Nui Dat base defence map. The major unit in each sector was to command their sector for defence purposes. There were 9 sectors. Each sector commander was responsible for siting and digging weapon pits, keeping foliage under control to ensure clear fields of fire, establishing and maintaining communications (line and radio) within the sector and back to the 1ATF Command Post (CP),[3] conducting day and night rehearsals for defence, constantly improving defences and establishing artillery and mortar defensive fire tasks.[4]

The switch to sector defence was made by radio to all sectors simultaneously. There was also a siren on the 1ATF Command Post that sounded the alarm. On receiving the radio message or hearing the siren, everyone inside the Nui Dat perimeter ‘stood to’ wearing full battle kit with weapons, in the perimeter bunkers and trenches, ready to face the enemy. Sector commanders reported when their sectors were ‘stood to’. The nickname for adopting sector defence was ‘Shovel nose’, and for ceasing sector defence, standing down and reverting to unit defence was ‘Hammer head’. These were passed by radio and line to sector HQs from 1ATF CP. 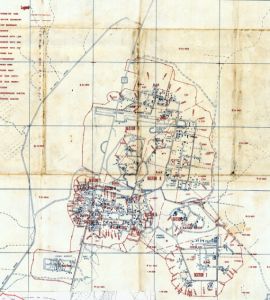 The Nui Dat base defence map showing the perimeter wire, machinegun bunkers inside the barbed wire perimeter fence and defensive fire targets outside.

Sector commanders were to develop plans for local counter-penetration forces within their Sectors.

Within ND there was also the Ready Reaction Force consisting of one infantry rifle company, a troop of APCs, a section of mortar carriers, a troop of tanks, and helicopter support. This could also be used in the event of an attack on Nui Dat but might also be deployed elsewhere beyond the Nui Dat perimeter.

Minor units within Nui Dat were allocated in support of the infantry battalions to provide extra reconnaissance patrols as required.

In addition to all this, sub-units on the 1ATF base perimeter were required to send out clearing patrols twice daily – at first light and 30 mins before last light. The perimeter wire around the base consisted of two double concertina fences. There were ‘gaps’ in the wire (wide enough to admit one person) in each rifle company frontage. These were closed before and after the clearing patrols passed through them each morning and evening. Within each rifle company perimeter frontage there were usually three machine-gun bunkers, and sometimes a watch tower. Rifle platoons were required to man the bunker on a 24-hour basis; two men at night, one man during the day. Each bunker was dug in to ground level, had overhead protection with a firing slit, and was equipped with an M60 machine-gun or sometimes a .50 calibre Machine-gun, with ammunition and a telephone. There were banks of claymore mines forward of the bunker, so sited that they could be seen from within the bunker. They were inside the perimeter wire. The claymore firing devices (known as ‘clackers’) were controlled by the sentry in the bunker. The grass between the perimeter fence and the bunkers was kept mown to provide good fields of observation and fire. There was an RPG screen in front of each bunker – sheets of 4” square reinforcing iron – intended to detonate or disrupt any rocket propelled grenades fired at the bunker from outside the wire. Some companies also had a watch tower that was occupied during the day. These were usually equipped with a telephone.

The use of helicopters gave the Task Force Commander the ability to reinforce Nui Dat relatively quickly by withdrawing troops from the field, if the need arose. Also, the company base at the Horseshoe north of the village of Dat Do, which usually also included a section or battery of 105mm howitzers, was within artillery range of Nui Dat, so each could provide artillery support to the other in the event of an attack.

Access to the Nui Dat base by Vietnamese nationals was strictly controlled. Only Bushmen Scouts – former enemy soldiers who had transferred their allegiance to the Republic of Vietnam – and members of the Army of the Republic of Vietnam intelligence were admitted. None of the menial tasks of rubbish collection, grounds maintenance, cooking and cleaning etc., were done by Vietnamese labour. This stood in sharp contrast to many US Army bases which employed Vietnamese labour and often had a collection of bars, shops and brothels near their main gates.

1ATF maintained permanent bases at Nui Dat and the Horseshoe, and semi-permanent bases at some Fire Support Bases such as Courtenay Hill and FSB Thrust. Security at each of these bases was tight. That no 1ATF base within Phuoc Tuy Province was subjected to a ground assault is perhaps testimony to the efficacy of the security at these bases.[6] The enemy confined his efforts to occasional attacks by fire.

To see an interactive Nui Dat base defence map, go to the Battle Map, click on the ‘stacked maps’ symbol in the top right of the screen and click on ‘Detailed maps’.

[3] There was a separate dedicated base defence radio network.

[5] Ibid, p. 5-3. All perimeter bunkers were numbered on the 1ATF base defence map. This enabled bunkers siting approaching enemy to call in their bunker number on the telephone provided so alerting the base commander to precise location of the threat.

[6] Only Fire Support Bases outside Phuoc Tuy Province, such as FSB Coral, Balmoral and Anderson, were attacked by ground assault.