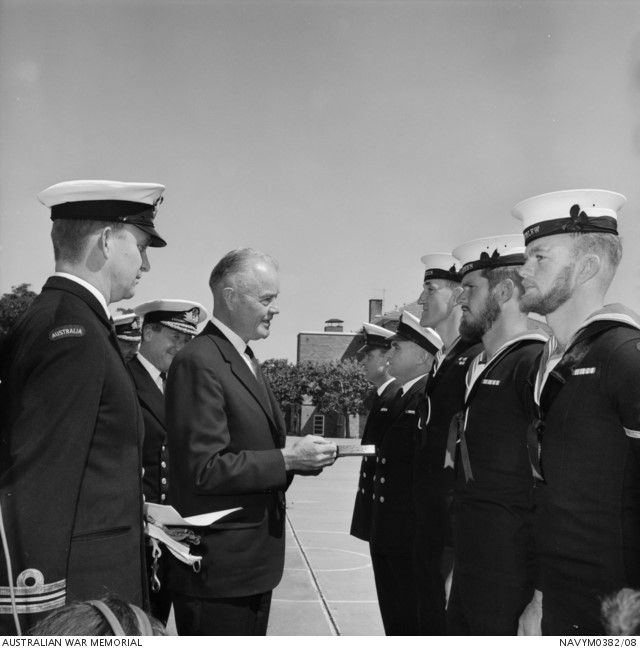 The first contingent of Clearance Diving Team 3 (CDT 3) personnel departed Sydney by air on 5 February 1967, arriving in Saigon the following day. The attitude of the team was best summed up by Lieutenant Shotter, who remarked ‘all are determined to keep up the effort and beat the VC at his own game’.

After initial introductions and briefings, the team divided into two sections. One section proceeded south to Nha Be, where its members concentrated on ship bottom searches. They also took part in the salvage of an USN minesweeper, MSC 49, damaged by a VC mine. This came as an early indication of the dangers presented by these often improvised and unstable devices.

The second section travelled to the village of Thu Duc, 14 miles north-east of Saigon, to help demolish a bridge that had already been partially destroyed by the VC. The continued presence of the VC in the near vicinity, necessarily delayed the start of the work, until an adequate security force was provided. Work to demolish the bridge took three days as operations were limited to slack water periods during daylight hours.

The team moved to Vung Tau on 18 February in preparation for participation in Operation STABLEDOOR duties. Teething troubles, in particular the fact that no one was expecting their arrival, caused some delays. However, the provision of somewhat austere accommodation – an old concrete bunker near the USN Harbour Entrance Control Post – and equipment allowed the term to become semi-operational. They were further hampered by strong tides which limited diving operations to 10-12 ships per day.

The bunker was soon christened the ‘cave’. Nevertheless, the Australians made the ‘cave’ their home away from home, and each contingent worked to improve its livability. Future additions included equipment stowage facilities, a covered outdoor patio, rainwater tanks and even an air-conditioner. By 1969 the walls had been lined with acoustic tiles and the floor tiled.

Throughout March 1967, 190 STABLEDOOR searches were conducted. The team also carried out a variety of other operations including a search for the body of an American sailor lost overboard from a swift boat, PCF 39. It transpired that a fisherman had already recovered the body and two members of CDT3 were tasked to search it for booby-traps. The use of booby-traps by the VC was a common practice throughout the war.

On 18 March four team members participated in the unit’s first operation with Vietnamese naval forces. Boxes had been seen on the shoreline near Baria in Phuoc Tuy Province, and the team was called upon to investigate the find and ensure they were not booby-trapped. A Vietnamese gunboat and American swift boat shelled the beach prior to the insertion of the force which included Vietnamese soldiers. No opposition was encountered and a quantity of American ammunition was successfully recovered. Later, when the force moved inland, they were fired upon by a sniper. Efforts to locate the sniper were unsuccessful, however, two VC river mines were found and destroyed.

By the close of March the team had conducted their first operation in support of a visiting Australian ship, searching MV Jeparit in Vung Tau. More importantly, early April saw the welcome delivery of contingent stores, allowing the team to become fully operational and ready to respond to all calls for emergency EOD assistance. This coincided with an increase in the frequency of EOD tasking which kept the team busy throughout the month.

In late April, intelligence reports indicated that the VC were planning a major assault against allied forces based around Vung Tau, to coincide with May Day. Sources suggested that the VC would employ underwater chariots to attack shipping in the harbour. In response, the team increased its rate of effort and dived during all slack water periods, both day and night. The Australians searched 66 ships during the last three days of April and another 327 throughout May, which established a new record for all EOD teams serving in Vietnam.

The onset of the wet season in late May brought some respite for CDT3. Weather conditions limited diving operations to emergency calls only. Although this meant less protection for ships arriving in Vung Tau, it was generally considered unlikely that the VC could make a successful attack in such adverse tides and currents. When not engaged on operations, team members studied captured enemy ordnance. While some items were manufactured by the VC, others had come from China, France, Japan and the Soviet Union.

On 18 May CDT3 was tasked to move to central Vung Tau to support the visit of Nguyen Cao Ky, Prime Minister of South Vietnam, and General William C. Westmoreland, Commander, US Military Assistance Command, Vietnam (COMUSMACV). Two days later the team was called upon to help salvage a crashed helicopter from the Suoi Giai River near Phu Loi, 25 miles north-north-east of Saigon. Lieutenant Shotter, Leading Seaman Boettcher and Able Seaman Kember were flown to the American Army base at Phu Loi and then by helicopter gunship to the crash site. The area was insecure and protection for the recovery team was provided by two battalion from the 1st Division, United States Army.

The recovery of the aircraft from ten feet of water was conducted in extremely hazardous conditions. Kember was instrumental in the recovery of two bodies from the wreckage and in rendering safe all ordnance and weapons still in the helicopter. Strops were later rigged to the fuselage which enabled a Chinook helicopter to airlift the wreckage to Phu Loi. The three team members involved were each presented with letters commending them for the outstanding actions and appointing them as honorary members of the 520th Transportation Battalion, United States Army. Kember was later decorated with the Distinguished Service Medal for this and other operations. 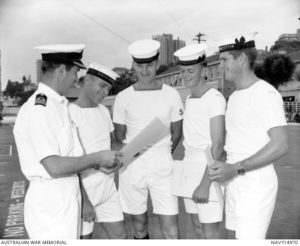 For the remainder of May and the first week of June the team responded to routine calls for EOD assistance. On 7 June Lieutenant Shotter and Petty Officer Clark participated in a combined Regional Force and Junk Force operation. Two ARVN battalions conducted a seaborne landing on an island, known to be harbouring a large VC arms cache, in the mouth of the Cui Dai River, 30 miles south of Vung Tau in the Mekong Delta. Shotter and Clark helped search villages on the island. One VC was killed by ARVN troops and a further six were captured. A large volume of arms, ammunition and medical supplies was also captured during this operation.

For much of June and July 1967, CDT3 personnel stripped allied and captured enemy ordnance in an effort to familiarise future contingents with a range of ordnance they were likely to encounter. These items were later packaged up and shipped to the EOD School of HMAS Rushcutter in Sydney, where they were used for training.

On 23 July, three divers joined a reconnaissance patrol to Long Hai, 15 miles from Vung Tau. Here they searched several villas in a VC occupied area for booby-traps. They were accompanied by Vietnamese Special Forces personnel and Major J. Grise, a US Army Adviser. The villas had at one time been owned by senior South Vietnamese generals and Madam Bhu, sister-in-law of the late Ngo Binh Diem, President of the Republic of Vietnamese from 1955 to 1963. The Special Forces intended to occupy the villas as a forward operational base.

On 4 August two team members proceeded to the village of Tan An, south west of Saigon, with personnel from the USN Harbour Clearance Unit. They were then taken down river to Tan Tru to locate and search a sunken US Army LCM8 landing craft for enemy ordnance and booby traps. The vessel was later declared safe and the team returned to Saigon. By now this type of work had become relatively routine.

The relief team arrived in Vietnam on 13 August and moved down to Vung Tau the next day after receiving briefings in Saigon. The teams conducted their handover over the next week and a half. The two contingents combined on 17 and 18 August to salvage a USN UH-1B Iroquois helicopter which had crashed in Vung Tau Harbour. Four of the aircrew survived the crash. The fifth crewmen, however, chose to evacuate the aircraft immediately prior to impact, and was killed by the still revolving blades. Although a search for his body was unsuccessful, it impressed upon the team the value of remaining in the aircraft should they find themselves in a similar situation.

All members of the first contingent of CDT3 personnel were awarded the USN Meritorious Unit Commendation. In addition to Kember’s decoration, Petty Officer Clark was mentioned in despatches for gallantry and distinguished conduct throughout his tour of duty.